There has been a massive change in the way businesses and local authorities deal with their waste and how technology is being used to turn previously unwanted material into a valuable resource.David Hall, managing director 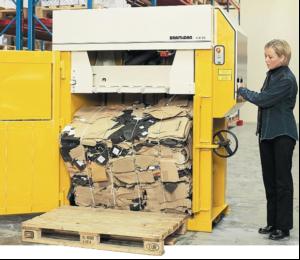 There has been a massive change in the way businesses and local authorities deal with their waste and how technology is being used to turn previously unwanted material into a valuable resource.David Hall, managing director of Kenburn Waste Management, explains

When I came into the business in the early nineties waste management was a much simpler task than it is today. We were living in a throw-away society with little thought given by the public or businesses to what happened to 'rubbish' after it was thrown away. Recycling was something we did with milk bottles and expensive aluminium cans, but little else.

Large compactors were used extensively by those producing large quantities of waste simply to reduce the cost of sending it to landfill; however, the world was about to change.

Government legislation such as the landfill tax and packaging waste directives introduced in the late nineties made it commercially viable to recycle materials, especially cardboard, rather than sending it to landfill.While packaging waste directives gave advice to retailers and manufacturers on how to reduce the amount of packaging waste, the landfill tax hit business owners hard in their wallets and was by far the biggest driver in encouraging them to change their attitude to waste management.

It just didn't make sense to continue sending material that could be recycled to landfill; why pay a hefty penalty for throwing something away when there was now a ready market for it? Baling rather than compacting became more attractive as it allowed the now valuable recyclable cardboard to be stored and transported easily, turning what had been an overhead into an income stream. Although the market price for waste cardboard has fluctuated over the years, it currently has a value of around £50/t with waste paper faring even better at around double that figure, depending on quality. Plastic bottles and containers are the second biggest commodity, although prices vary widely between £40 and £250/t depending on chemical composition and variables such as cleanliness and colour. Offcuts from plastic product manufacturing command some of the highest prices.

Recycling contractors will generally pay a higher price for baled material than for loose waste as it reduces their transport and labour costs. In the case of waste cardboard, recycling companies often ask for 'mill sized bales', in other words large bales of around 400kg 'four wire tied'. Although there are no specific dimensions an ideal load is 24t for a large curtain-side lorry.

Balers fall into two main categories, horizontal and vertical, with large generators of waste card or paper (those producing more than about 2t/day) usually opting for the horizontal type. Although more expensive (£70,000 to £250,000), these machines, some of which can produce up to 50t of pressure, require less manual labour to operate, often being fed automatically via a conveyor and featuring automatic tying and bale ejection.

The smaller vertical balers, which typically cost between £3000 and £15,000 depending on size, are popular with the retail trade.

While 20 years ago it's unlikely that smaller shops would have considered baling, the cost of sending waste to landfill, currently around £50/t, has made them an economic proposition, even without the revenue made from selling their bales. There are health and safety issues too. Piles of loose cardboard at the rear of the premises is no longer acceptable from an environmental point of view. Apart from being unsightly there is the ever-present threat of fire, often caused by vandals, which could destroy the business and possibly endanger life. Add to that the high cost of storing loose cardboard indoors and the case for investing in baling equipment is pretty compelling.

I think it's important to see the acquisition of baling equipment as an investment rather than an overhead. Although the capital cost can be substantial the ROI is generally fairly rapid depending on the volume of material being handled.However, with the increase in demand for balers over the last few years, the industry has been blighted by companies offering cheap, sub-standard equipment from dubious overseas manufacturers. Poor reliability, low safety standards and often appalling after-sales support make these machines an expensive longer term option.

I know of cases where machines have been out of action for days waiting for a supplier's sole engineer to fix the problem, and of machines suffering potentially dangerous fractures during operation. It makes better economics to buy a refurbished machine from a reputable supplier than risk buying a cheap new one.

When it comes to financing new equipment we've seen a big increase in the number of machines being leased rather than purchased outright. Another option is to rent a machine from a baling supplier.

Often this can be done over short periods perhaps to cope with a temporary increase in the volume of waste.With landfill charges set to rise by £8.00/t year-on-year in an effort to meet the UK's recycling targets, the demand for baling equipment is likely to remain high.
MORE FROM THIS COMPANY
Send Enquiry
View Company Profile
RELATED ARTICLES