A national dairy firm has been sentenced following a major explosion at its cheese factory in Cumbria. 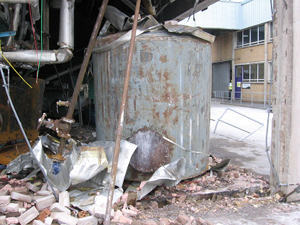 A national dairy firm has been sentenced following a major explosion at its cheese factory in Cumbria.

The boiler house at Aspatria Creamery, on Station Road in Aspatria, was partially destroyed in the blast on 29 July 2010, which threw debris more than 100 metres across the site.

No one was injured in the incident despite the force of the explosion lifting the roof off the building and blowing out part of two ground floor walls.

The First Milk Cheese Company Ltd was prosecuted by the Health and Safety Executive (HSE) after an investigation found a blocked vent on the calorifier - a water heating and storage system - had caused it to explode.

Carlisle Magistrates' Court heard today (15 August 2012) that the calorifier could hold up to 9,000 litres of water and was used to produce hot water for washing down the dairy.

Maintenance engineers at the plant had been manually controlling the steam supply valve to the calorifier after the automatic control broke down.

The HSE investigation found the vent pipe on the tank, which should have allowed water to escape if it became too hot, had become completely blocked with calcium carbonate - possibly over several years.

This meant the pressure inside the tank continued to rise, with the temperature of the water reaching almost 150 degrees Celsius, before it eventually caused an explosion.

The First Milk Cheese Company Ltd pleaded guilty to a breach of the Pressure Systems Safety Regulations 2000 by failing to ensure the vent pipe on the calorifier was kept clear.

Speaking after the hearing, HSE Inspector Michael Griffiths said: "This ultimately led to the explosion after the tank could not cope with the increase in pressure when the temperature of the water reached almost 150 degree Celsius.

"I hope this prosecution will act as a warning to any other company that uses hot water and steam systems to make sure they are properly maintained so that incidents like this don't happen in the future."
MORE FROM THIS COMPANY