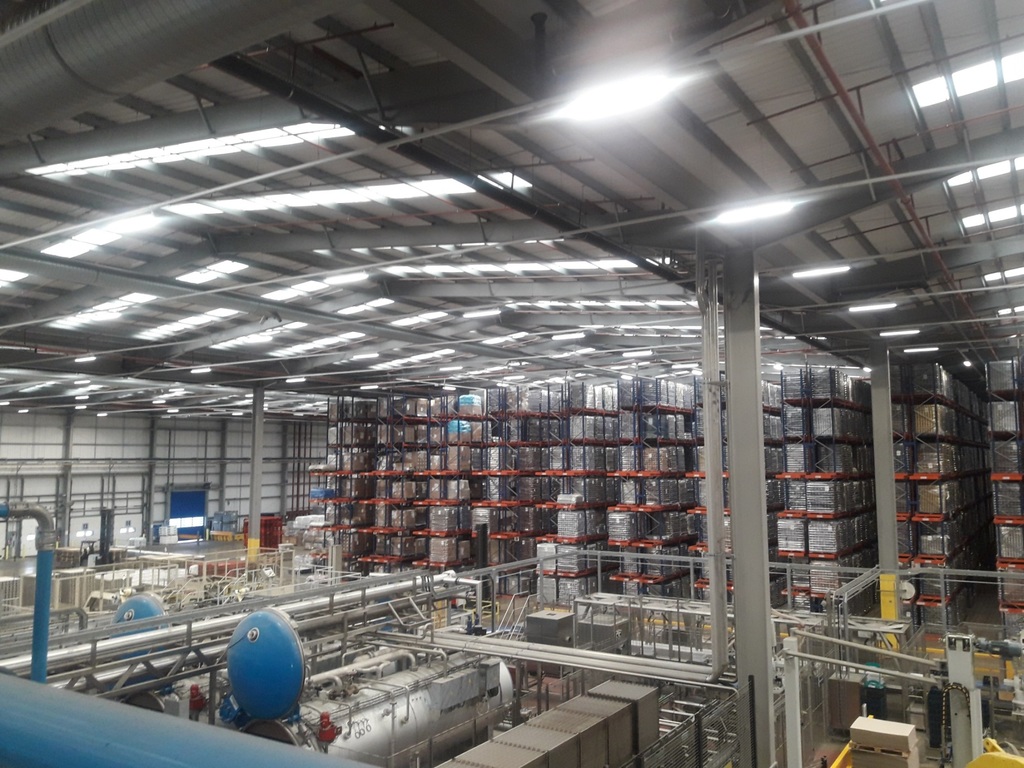 Butcher’s Pet Care is a British company based in Crick, Northamptonshire, specialising in the production of high-quality foods for cats and dogs. Butcher’s tradition dates back to 1987, when the small family enterprise was established and thanks to passion and devotion of its employees and the involvement of the owners is currently doing business internationally.

The company had its entire site retrofitted using Ecolighting’s recommended LED luminaires, of which 647 were installed internally and 107 externally.

Butcher’s Pet Care set a brief of a zero cost (zero capital outlay) project which was facilitated through Ecolighting’s new lease purchase offering. The solution meant that the company wouldn’t pay any capital upfront and would just pay a monthly lease purchase cost, which was outweighed significantly by the monthly savings.

The company was paying around £12,000 per annum just maintaining its existing system. With the difference between the lease purchase monthly payment and the monthly energy saving standing at some £3,400 per month the energy savings with the new LED lighting are over £40,000 per annum. Based on this, Ecolighting was chosen for the job for its ability to provide a bespoke solution, zero capital outlay and the quality of its products.

Andy Pynn, electrical and projects engineer at Butcher’s Pet Care, commented, “Ecolighting made a number of visits whilst we looked at various options and nothing was too much trouble for them. Once the order was placed, the project team came on site and produced an in depth installation plan so that we could schedule and restrict access to areas of the shop floor with lots of notice. Out of hours work was included. The installation team worked to food quality standards at all times and were very friendly and efficient. We were also pleased with the good quality documentation supplied upon project completion.”

He continued, “The higher lighting levels across the factory now easily meets the health and safety requirements and the lighting is now running at much lower energy consumption, therefore saving us money. We would definitely recommend Ecolighting to others looking to upgrade their systems. Our lighting levels have improved and are keeping shop floor employees happy and our energy consumption is down which is keeping the accountants happy, so we are very pleased with the end result.”

Chosen for the installation at the Butcher’s Pet Care site are the Pegasus LED, Sapphire LED and Osram/Ledvance LED floodlights, as well as the Medusa LED streetlight and Altos emergency lighting system.

Pegasus from Ecolighting is a top specification LED high bay luminaire and one of the company’s most popular light fittings. Installed throughout the site’s warehouse, the Pegasus is encased in a robust yet lightweight and stylish aluminium body and uses an Osram driver and top quality Osram LEDs giving 166 lumens per watt and up to 80% energy saving in installations.

For the Crick site’s mezzanine area, the Sapphire luminaire was chosen. Sapphire from Ecolighting is one of the company’s favourite LED luminaires for use in commercial and industrial environments. Manufactured by Ecolighting in the UK, Sapphire features high output chip-on-board LEDs and OSRAM driver encased in a linear body with a polycarbonate diffuser, all rated IP54.

Fitted outside to cover Butcher’s Pet Care’s site, the Medusa LED is ideal for use in streets, security, car parks and building exteriors and allows users to benefit from huge cost savings and a substantial drop in energy use. By using top quality LEDs in Medusa, Ecolighting ensures high thermal conductivity, minimal light decay, pure light, very stable performance and a 50,000 hour lifespan.

Also outside are the company’s Osram/Ledvance LED floodlights. Robust and weatherproof to IP65, the Osram/Ledvance luminaire is easy to maintain, lightweight and has a stylish body with versatile mounting options. Ideal for use in stadiums, security lighting, car parks, sporting venues, signage lighting and service yards, the Osram/Ledvance luminaire allows users to benefit from huge cost savings and makes a substantial difference to energy bills. This includes a 60% saving over metal halide floodlighting.

As one of the UK leaders in LED lighting solutions to commerce and industry, Ecolighting has worked with many other big name companies such as Amazon, Bibby Distribution, Kuehne Nagel, Debenhams, Carlsberg, Culina, Cadbury and Great Bear.