Apprentice of the Year Award 2019 now open for entries

Entries are now open for this year’s ECA Edmundson Apprentice of the Year Award, which aims to showcase the very best talent across ECA’s member businesses. 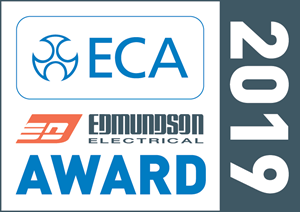 Now in its 43rd year, the award is widely recognised as the premier training award in the electrotechnical and engineering services industry. The three finalists will not only have good technical skills but will also be role models for others in the industry.

The winner will be recognised as an industry ambassador and be involved with ECA campaigns and events during the year. They will also receive an array of prizes including a £1,500 cash prize, a state-of-the-art toolkit and a unique study trip overseas hosted by a major electrical industry manufacturing company.

There are also great prizes for two runners-up, including a £750 cash prize, a state-of-the-art toolkit and a certificate of commendation.
Andrew Eldred, Director of Employment and Skills at ECA, commented:

Edmundson Electrical Managing Director Mark Felber added: “We are delighted to once again sponsor the ECA Edmundson Electrical Apprentice of the Year Award. Edmundson has a long-established policy of developing young people within our sector through both our apprenticeship and graduate schemes. The industry continues to lead the way in offering great opportunities for young people to develop a rewarding and enjoyable career."
Past winners of the ECA Edmundson Award have gone on to a range of careers, including running their own companies in the UK and taking high profile jobs internationally. The Award has also boosted the profile of ECA member companies that enter their apprentices, by highlighting their support for future industry talent.

2018 ECA Edmundson Apprentice of the Year Jack Teasdale, of Opus Building Services, commented: “It’s been very humbling and a privilege to be recognised as ECA Edmundson Apprentice of the Year, and to be an ambassador for other apprentices. One of my mentors was himself the winner of this award in 1997, so it’s been an honour to follow in his footsteps.”

Eligible applicants will have completed their AM2 between 1 April 2018 and 31 March 2019. The entry deadline is Friday 21 June 2019.
For more information and details about how to enter, visit www.eca.co.uk/edmundson.