The Institution of Diagnostic Engineers explains the importance of knowing your bearings when it comes to maintenance. 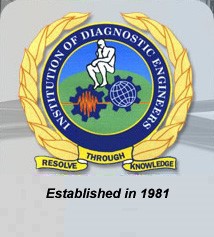 A bearing is the element of a machine that constrains relative motion to only the desired motion, and reduces then friction between moving parts. The design of the bearing may, for example, provide for free linear movement of the moving part or for free rotation about a fixed axis; or, it may prevent motion by controlling the vectors of normal forces that bear on the moving parts. Most bearings facilitate the desired motion by minimizing friction. Bearings are classified broadly according to the type of operation, the motions allowed, or to the directions of the loads (forces) applied to the parts.

Rotary bearings hold rotating components such as shafts of axles within mechanical systems, and transfer axial and radial loads from the source of the load to the structure supporting it. The simplest form of bearing, the plain bearing consists of a shaft rotating in a hole. The necessary lubrication is used to reduce friction. In the ball and roller types, to prevent sliding friction, rolling elements such as rollers or balls with a circular cross-section are located between the races or journals of the bearing assembly. A wide variety of bearing designs exists to allow the demands of the application to be correctly met for maximum efficiency, reliability, durability and performance. The simplest bearings are bearing surfaces, cut or formed into a part, with varying degrees of control over the form, size, roughness and location of the surface. Other bearings are separate devices installed into a machine or machine part. The most sophisticated bearings for the most demanding applications are very precise devices; their manufacture requires some of the highest standards of current technology.

There are at least six common types of bearing, each of which operates on different principles: -

1. Plain bearing consisting of a shaft rotating in a hole. There are several specific styles: bushing, journal, sleeve, rifle and composite bearing

2. Rolling element bearing in which rolling elements placed between the turning and stationary races prevent sliding friction and of which there are two main types: -

a. Ball bearing in which the rolling elements are spherical balls,

b. Roller bearing in which the rolling elements are cylindrical, taper and spherical rollers,

3. Jewel bearing, a plain bearing in which one of the bearing surfaces is made of an ultrahard glassy jewel material such as sapphire, to reduce friction and wear,

4. Fluid bearing, a noncontact bearing in which the load is supported by a gas or liquid,

5. Magnetic bearing, in which the load is supported by a magnetic field,

6. Flexure bearing, in which the motion is supported by a load element which bends.

The plain bearing is, by far, the most common type and uses surfaces in rubbing contact, often with a lubricant such as oil or graphite. With suitable lubrication, plain bearings often give entirely acceptable accuracy, life, and friction at minimal cost and are, therefore, very widely used

Reducing friction in bearings is often important for efficiency, to reduce wear and to facilitate extended use at high speeds and to avoid overheating and premature failure of the bearing. Essentially, a bearing can reduce friction by virtue of its shape, by its material, or by introducing and containing a fluid between surfaces or by separating the surfaces with an electromagnetic field. Combinations of these can even be employed within the same bearing. An example of this is where the cage is made of plastic, and it separates the rollers/balls, which reduce friction by their shape and finish.

Bearing design varies depending on the size and directions of the forces that they are required to support. Forces can be predominately radial, axial, or bending moments perpendicular to the main axis. Different bearing types have different operating speed limits. Speed is typically specified as maximum relative surface speeds, often specified ft/s or m/s. Rotational bearings typically describe performance in terms of the product DN where D is the mean diameter (often in mm) of the bearing and N is the rotation rate in revolutions per minute

Bearing life is determined by load, temperature, maintenance, lubrication, material defects, contamination, handling, installation and other factors. These factors can all have a significant effect. For example, the service life of bearings in one application was extended dramatically by changing how the bearings were stored before installation and use, as vibrations during storage caused lubricant failure even when the only load on the bearing was its own weight; the resulting damage is often false brinelling. Bearing life is statistical: several samples of a given bearing will often exhibit a bell curve of service life, with a few samples showing significantly better or worse life. Bearing life varies because microscopic structure and contamination vary greatly even where macroscopically they seem identical.   Bearings are often specified to give an "L10" life (outside the USA, it may be referred to as "B10" life.) This is the life at which ten percent of the bearings in that application can be expected to have failed due to classical fatigue failure (and not any other mode of failure like lubrication starvation, wrong mounting etc.), or, alternatively, the life at which ninety percent will still be operating. The L10 life of the bearing is theoretical life and may not represent service life of the bearing.   Bearings are also rated using C0 (static loading) value, which is the basic load rating as a reference, and not an actual load value.

The service life of the bearing is affected by many parameters that are not controlled by the bearing manufacturers. For example, bearing mounting, temperature, exposure to external environment, lubricant cleanliness and electrical currents through bearings etc.

The temperature and terrain of the micro-surface will determine the amount of friction by the touching of solid parts. Bearing life is often much better when the bearing is kept clean and well lubricated. However, many applications make good maintenance difficult. For example, bearings in the conveyor of a rock crusher are exposed continually to hard abrasive particles. Cleaning is of little use, because cleaning is expensive, and the bearing is contaminated again as soon as the conveyor resumes operation. Thus, a good maintenance program might lubricate the bearings frequently but not include any disassembly for cleaning. The frequent lubrication, by its nature, provides a limited kind of cleaning action, by displacing older (grit-filled) oil or grease with a fresh charge, which itself collects grit before being displaced by the next cycle.

Strength and mobility help determine the amount of load the bearing type can carry.

Alignment factors can play a damaging role in wear and tear, yet overcome by computer aid signaling and non-rubbing bearing types, such as magnetic levitation or air field pressure.

Many bearings require periodic maintenance to prevent premature failure, but many others require little maintenance.  The latter include various kinds of fluid and magnetic bearings, as well as rolling-element bearings that are described with terms including sealed bearing and sealed for life.  These contain seals to keep the dirt out and the grease in. They work successfully in many applications, providing maintenance-free operation. Some applications cannot use them effectively.

Non-sealed bearings often have a grease fitting, for periodic lubrication with am grease gun, or an oil cup for periodic filling with oil.   Before the 1970s, sealed bearings were not encountered on most machinery, and oiling and greasing were a more common activity than they are today.   For example, automotive chassis used to require "lube jobs" nearly as often as engine oil changes, but today's car chassis are mostly sealed for life. From the late 1700s to the mid 1900s, industry relied on many workers called oilers or greasers to lubricate machinery frequently with oil cans.