The days of estimated and approximate values will soon be over as far as desiccant management in compressed air processing is concerned, according to Horst Singer of Beko Technologies.Here, he outlines a new test method th 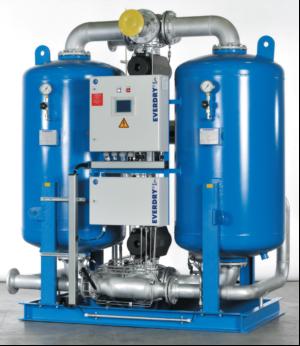 The days of estimated and approximate values will soon be over as far as desiccant management in compressed air processing is concerned, according to Horst Singer of Beko Technologies.Here, he outlines a new test method that will soon be available for adsorption dryers

Desiccant ageing Compressed air always consists of a mixture of different gases and contaminants. In addition to water, contaminations by hydrocarbon compounds, flue gases from combustion processes (such as CO2, CO, NOx, SO2) or by solid particles, such as dusts, can nearly always be found. The substances which cannot be removed through filtration accumulate on the unsaturated boundary surfaces of the desiccant and in this way reduce the absorptive capacity of the desiccant for water vapour and water aerosols. The depositions are not completely dissolved during regeneration. During desorption at higher temperatures, these contaminations can even lead to the cracking or polymerisation of organic molecules. The permanent residues affect the capacity, ie the service life of the desiccants.

The outlet zones of each adsorption vessel are decisive for the quality of the released compressed air. This area is subject to natural ageing which slowly takes place over a period of many years of operation. The rapidity of the ageing process is significantly influenced by the number of regeneration cycles, the quality and the temperature level of the desorption air.

With a decreasing adsorption capacity, the desired degree of dryness is no longer achieved over the full adsorption cycle, regardless of whether the decrease is a consequence of a deterioration of the quantitative or the qualitative properties of the desiccant. An introduction of moisture into the connected compressed air system starts.This can lead to expensive breakdowns either through production stoppage, rejected goods or the re-working of defective products. The consequence could be supply shortages or even delayed delivery dates with the inevitable contractual penalties.

To detect the loss of efficiency of a desiccant at an early stage, BEKO Technologies has developed a method where reaction is replaced by pro-activity. Instead of carrying out repair works, priority is given to function maintaining preventive measures.

Time for desiccant replacement The introduction of moisture into the compressed air system can be avoided by the replacement of the desiccant in good time.

With regards to maintenance, there are different service strategies, each with their own advantages and disadvantages:

Repair after a breakdown The dryer is used beyond its maximal operating time. Subsequent to moisture penetration at the outlet of the adsorption bed, introduction of moisture into the compressed air system starts. A dew point measuring device would indicate the failure and react with a fault message. However, there may not be time for a preventive measure to stop the failure. The plant will be out of service until there is a new charge of desiccant and a service technician is available.

Servicing in accordance with predefined maintenance intervals The manufacturer of the adsorption dryer defines the service life of the desiccant on the basis of operating hours. They consider neither the individual degree of use nor plant contaminants. Beko believes that the risk of malfunction will not be detected in time. The replacement intervals are not demand oriented but take place after a defined period of time specified in the operating instructions. Each time, 100% of the desiccant is replaced, resulting in maximum costs.

Condition-oriented servicing The concept of condition orientation is based upon the regular measurement of the desiccant condition. The service life of the desiccant is almost entirely used without lowering the efficiency of the dryer.

The Q-test For the so-called Q-test, liquid water is filled into a glass vessel in which a desiccant sample was placed beforehand. Reaction heat forms as a result of the exothermal process, which serves to indicate the activity or the remaining wear reserve of the desiccant. The more active the desiccant, the more heat is formed.Measurement takes place under atmospheric pressure and not under the real operating pressure and, Beko says, the test conditions, such as ambient conditions and the water temperature, are variable, so that exact repetition is difficult. Only liquid water is used for loading. The Q-test only indicates a trend for the quantitative properties of the tested desiccant.

New test concept To ensure the specified adsorption performance of adsorption dryers, BEKO Technologies has developed a condition oriented servicing concept which is carried out under practical conditions and which also constitutes an integral part of service agreements.

Test of desiccant when new Each newly delivered desiccant charge is loaded under reference conditions in a compressed air plant standardised in accordance with DRL 82007 and subsequently regenerated. The desiccant activated in this manner will then be loaded over the entire moisture spectrum and the measurement results are archived electronically. They are the basis for recurrent comparative measurements of charges.

Desiccant sampling A sampling device of tube-in-tube construction is used. It has a closeable opening for the withdrawal of the amount required for analysis via the sampling aperture. This special device allows sampling at any height of the desiccant bed.

Desiccant analysis After complete regeneration, the desiccant is gradually loaded with the defined moisture spectrum in the test plant standardised in accordance with DRL 82007. Tests are carried out without being influenced by the ambient conditions. The results allow a reproducible statement regarding the quantitative and qualitative properties of the desiccant.

On the one hand, the demand oriented concept ensures the process safety, and on the other hand it has an economic effect on the operation of the adsorption dryers. The desiccant replacement always takes place at the economically optimum point in time. All service technicians receive further training in the BEKO-owned Education Centre and are also tested there. In this way, it ensures that competent service is available to the customer, who is also instructed with regard to compliance with the latest legal provisions.

The compressed air user has the opportunity to concentrate his maintenance work independent of manufacturers and brands in one single service plan. This leads to further cost-savings and to a significant reduction of downtime for maintenance measures.

Arrangements for the standardised desiccant test do not involve additional costs or additional time because the samples for the comparative measurements are routinely taken by the BEKO service technicians during the general maintenance measures within the scope of an established service plan.
MORE FROM THIS COMPANY