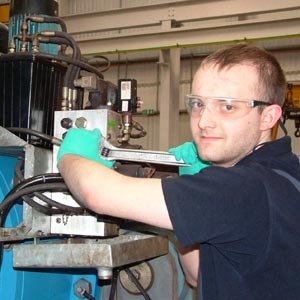 Mike Peate is the first apprentice in recent years to graduate at Siemens Mechanical Drives, which is part of Siemens Industry Automation and Drive Technologies.

The 20-year-old from Guiseley began at Siemens in September 2006 as a 16-year-old apprentice and studied for an HNC in mechanical engineering at Bradford College, after achieving an ONC in the same subject two years into his course.

He has also achieved NVQ levels 2 and 3, and combined working towards all of these qualifications with hands-on experience gained in a broad range of manufacturing disciplines at the Siemens factory several days a week. There he was mentored by another Siemens graduate apprentice, Richard Durham, who joined what was then Flender Power Transmission at its previous Bradford base in 1990 as an apprentice. Richard is now production and quality manager at the new Leeds facility. Â

Mike said of his apprenticeship: â€œI feel privileged to be the first of a new batch of apprentices and very proud to have done my apprenticeship at a Siemens company.Â  It has been a great learning experience.â€

General manager Simon Nadin commented on Mike's graduation: â€œSiemens are very committed to UK manufacturing and Mike is an excellent example of the type of apprentice we want to train, keep and nurture. We're delighted to have him on the team.â€

The Leeds factory currently has five apprentices on a rolling programme.
MORE FROM THIS COMPANY