As Charlotte Stonestreet reports, although the concept of the 4th Industrial revolution might have originated with the German industrial automation giants, much of the associated technology – for example sensors, robotic systems, scanners – is nothing new to the warehouse and logistics sector.

What is more recent is the ability of the devices to transmit data which can then be analysed to provide valuable a insight to the operation, enabling businesses to see and understand warehouse and supply chain activities.

According to Dave Berridge, secretary of the Automated Material Handling Systems Association (AMHSA) I4.0 in the logistics sector – often dubbed Logistics 4.0 – data transparency over all distribution channels will allow inventory optimisation across all internal and external warehouse locations, through to items stored at the sites of suppliers.

In Logistics 4.0, embedded chips and sensors turn the handling equipment into cyber-physical systems (CPS) that interact with their environment and respond to changes. Such data is stored to allow smart objects to ‘remember’ certain sequences and access and this ‘knowledge’ when required. It also enables forecasting for all distribution centre processes – from receiving, to order picking and then dispatch – to optimise the use of both machinery and labour. The amount of data coming from smart ‘things’ will dramatically increase over the coming years. It is calculated that worldwide data volumes double every two years. From 2013 to 2020, the digital universe will grow by a factor of 10, from 4.4 trillion gigabytes to 44 trillion gigabytes (that is, 44 zettabytes). Data is, says Berridge, the world’s new natural resource.

In Logistics 4.0, embedded chips and sensors turn the handling equipment into cyber-physical systems

Successful implementation of Logistics 4.0 will require warehouses to become more automated. Berridge observes that there is a reasonable amount of automation in the logistics industry today, although little of it could be described as robotic, due to the complex nature of the picking and sorting tasks involved. Traditional robots have been adept at repeatable tasks in a controlled environment – such as moving heavy but identical metal parts on a car production line – but have struggled with uncertainty, such as when tasks vary over time or the working environment changes. With advances in sensor technology that will allow robots to react dynamically to their environment, this is set to change. In particular, we are already seeing the introduction of co-operative robots – ‘cobots’ – within warehouse operations. These robots are sufficiently intelligent to ‘learn’ from their environment and are therefore considered to be safe enough to work alongside humans without the requirement for fencing and other safety precautions. 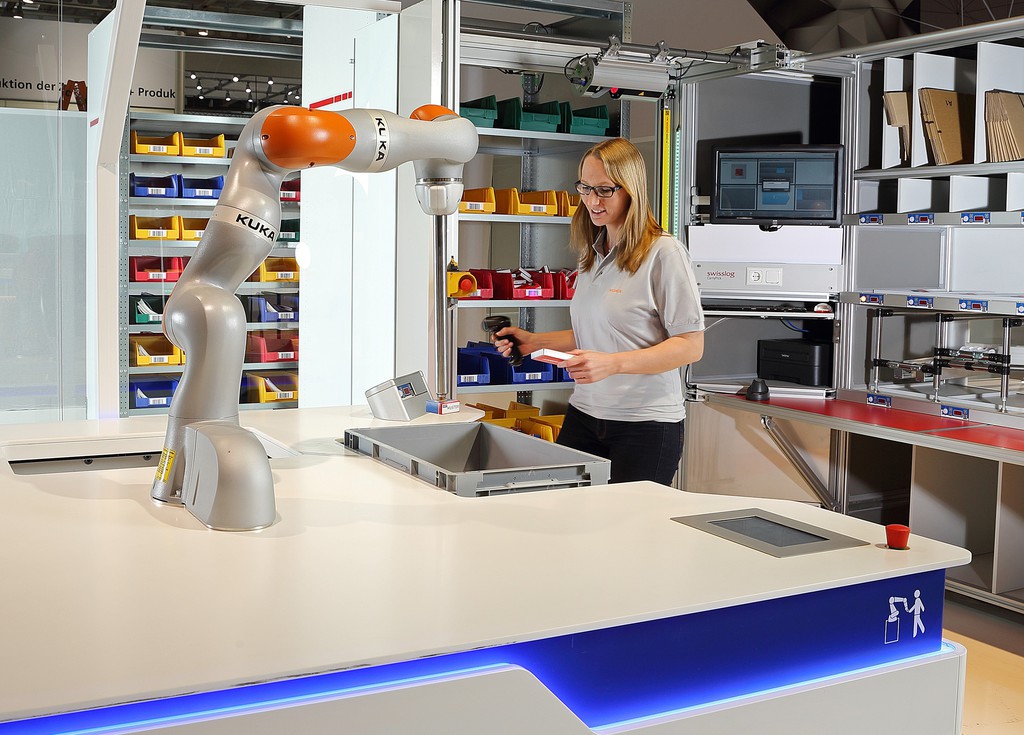 The form an I4.0 application any can take in any sector is hugely varied and often needs to encompass vast areas of expertise, resulting in the need for strategic partnerships. In one example Bosch and SAP have agreed to work together on internet of things (IoT) and Industry 4.0, with forklift tracking as one possible application.

To this end, there are plans to enable customers to use the SAP HANA database platform in the Bosch IoT Cloud. The aim is to process large quantities of data for IoT applications in real time. In addition, Bosch and SAP will work to combine their software and cloud expertise in the future. Bosch IoT microservices will be made available on the SAP HANA cloud platform, as a way to connect different devices and components.

This includes enabling secure and more efficient connectivity for vehicles, manufacturing machinery, or tools with various, and preferably open platforms. The aim is always to offer customers new, smart services.

The aim is always to offer customers new, smart services

One specific example of cooperation between the two international companies is positional data for forklifts, increasing the transparency and efficiency in logistics. In an existing IIC-coordinated testbed known as Track&Trace, it is now possible to determine the location of forklifts in large warehouses, aircraft hangars, or industrial sites in real time and to the nearest centimetre. Zeno Track, a start-up founded by Bosch, pinpoints the forklifts using cameras, GPS, laser scanners, radio, and connected motion sensors. The location data is transferred via the Bosch IoT Cloud to the SAP Vehicle Insights fleet management system. As a result, vehicle fleets can be managed intelligently and in a way that best supports the planning and fulfilment of transport orders or maintenance schedules. This reduces outlay and increases efficiency. The cooperation between Bosch and SAP shows how the interplay of sensors and software enables the creation of new services that go beyond individual companies.

Moreover, the two companies aim to develop further solutions in areas such as automated and connected driving. These always produce great quantities of data that must be evaluated quickly and reliably.

One company that is embracing the intelligent, integrated and connected processes of Industry 4.0 is automotive manufacturer Audi, which recently hosted a TechDay on the theme of the smart factory at its headquarters in Ingolstadt, Bavaria.

The technology day focussed on current projects using smart technologies to improve efficiency in production and logistics. Among them was a project using automated guided vehicles (AGVs) for internal transport. In a pilot project, Egemin Automation will be equipping part of Audi's logistics operations at Ingolstadt with AGVs. Vehicle automation will also be provided by Egemin. 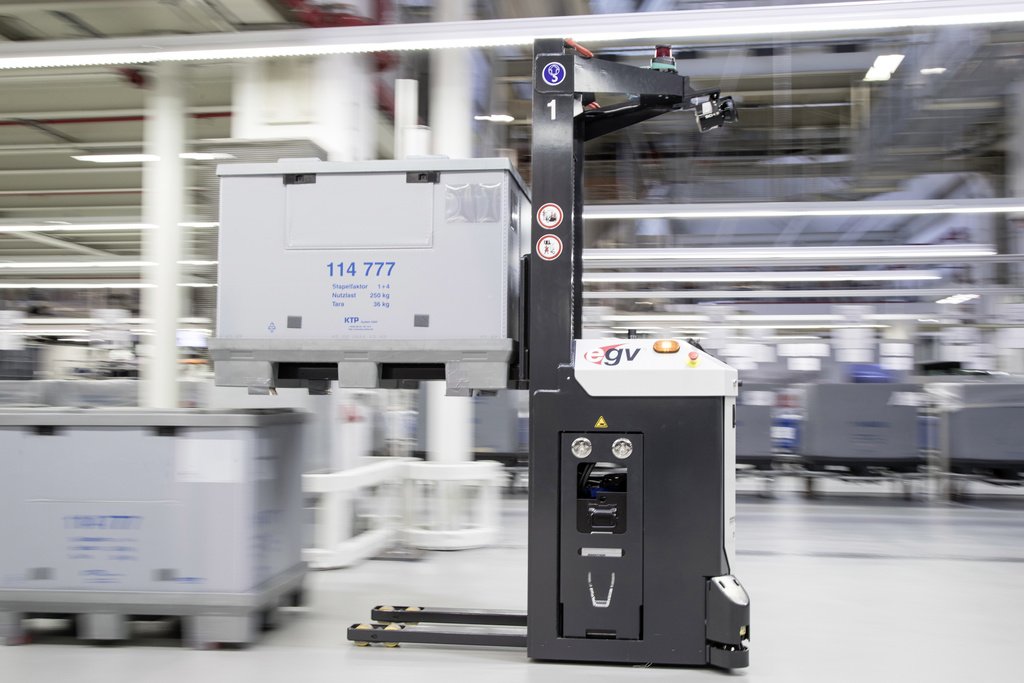 April 2017 will see the start of a pilot AGV project aimed at improving internal transport at the Logistics and Goods Transport Centre Ingolstadt, which is currently carried out by trained personnel using manual forklifts. For the project Egemin will be integrating an automated E’gv Hybrid (Egemin Guided Vehicle) solution based on two FM-X 12 reach trucks manufactured by Still, Egemin’s sister company in the KION Group. Automation will lead to space savings for Audi, as the manoeuvring areas between storage racks will be eliminated. The vehicles will also be available round the clock across all three shifts, increasing efficiency in the warehouse.
Audi supplies contract manufacturing operations in China and India from the 25,000 sq m warehouse, and fills up to 2,500 freight containers per year with goods from the Logistics and Goods Transport Center Ingolstadt.

At the TechDay, Stefan Meier, project manager at Audi, showed how containers will be moved into and out of storage using an E'gv STANDARD FLV2012/N vehicle, and explained: “The components for our vehicles come to us in 'large load carrier' containers. In future, the automated guided vehicles will work autonomously to move the containers into and out of high-rack storage and supply the packaging areas." 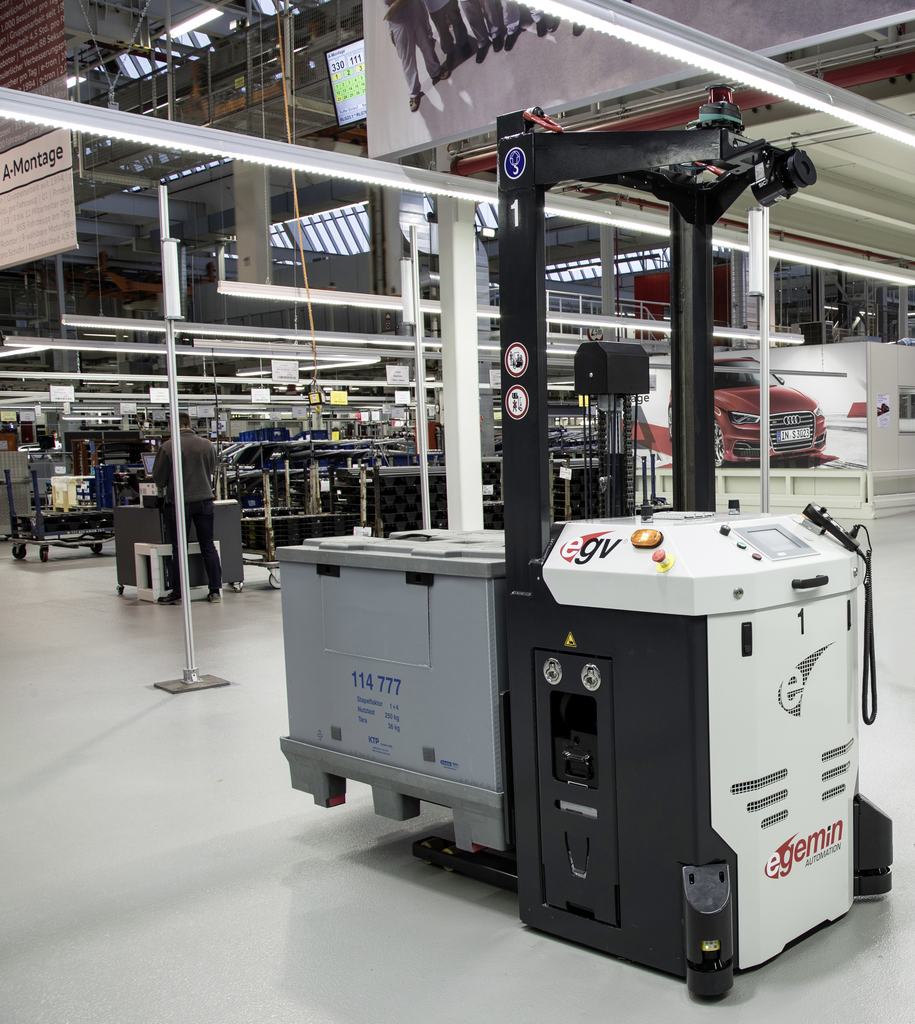 Last year saw DHL Supply Chain roll out the latest phase of its Vision Picking Program following a successful trial of the augmented reality technology in the Netherlands. Following the trial, DHL and partners Google, Vuzix and Ubimax refined the vision picking solution and DHL is now expanding the program across different industry sectors on a global scale, forging another step forward for augmented reality solutions in logistics.

“We are excited to further test and develop vision picking as a solution that can be readily available to our customers. More importantly, this technology is not just one step towards digitalising manual processes on the shop floor, it also takes us one step closer towards Industry 4.0. Testing technologies like augmented reality, robotics and Internet of Things will continue to be a big part of our DNA,” said John Gilbert, CEO Supply Chain. 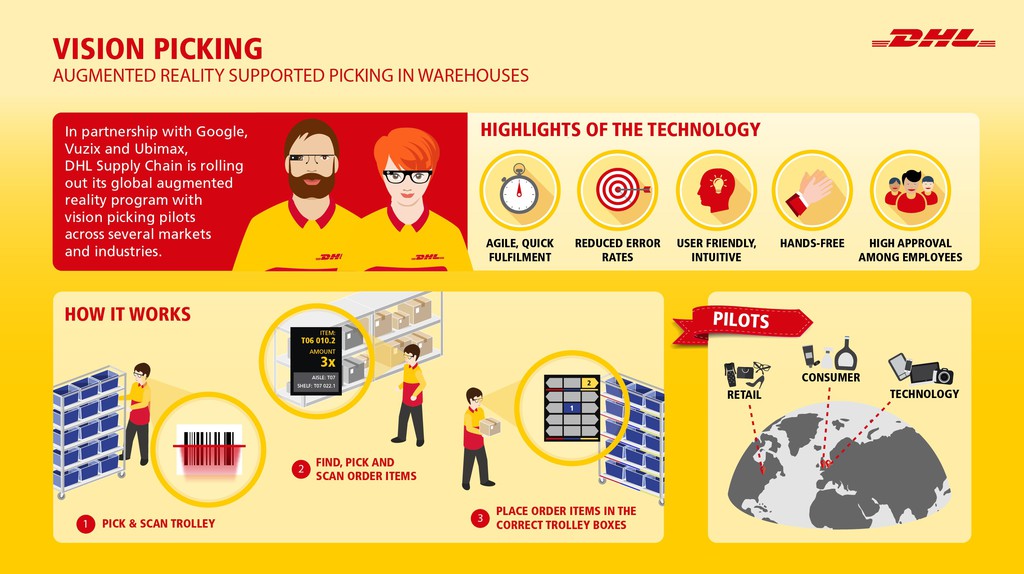 Pickers are equipped with advanced smart glasses which visually display where each picked item needs to be placed on the trolley. Vision Picking enables hands free order picking at a faster pace, along with reduced error rates. Throughout 2016, the smart glasses were piloted across various industries such as technology, retail, consumer and automotive industries. The data available from these pilots will further determine the technology’s potential for broader implementation. The pilot sites are spread across the United States, Mainland Europe and the United Kingdom, with the Ricoh facility in Bergen op Zoom, the Netherlands, where the solution was first tested, being the launch site for this new exploration phase.

A recent smart warehouse project is making use of driverless vehicles with Basler time-of-flight 3D cameras. Up to now, driverless vehicles have tended to be a relatively inflexible solution, having to follow predefined routes and being unable to react to changes in the working envelope. For example, if a barrier is encountered the autonomous vehicle would be forced into making an emergency stop. If an object is not located precisely where it is expected to be, then the vehicle would be unable to take any further action. Another disadvantage is that these vehicles require extensive orientation aids, such as magnetic sensors or marked pathways along the floor to understand their current location.

As a result, to date driverless transport systems have been time-intensive and expensive to set up. However, the introduction of Industry 4.0 brings new approaches and ways of providing machines with the innate human ability to orient themselves and understand simple commands. At Hannover Messe 2016, the Federal Ministry for Economic Affairs and Energy (BMWi), Germany presented its work on ‘driverless transport vehicles’.

Industry 4.0 brings new approaches and ways of providing machines with the innate human ability to orient themselves 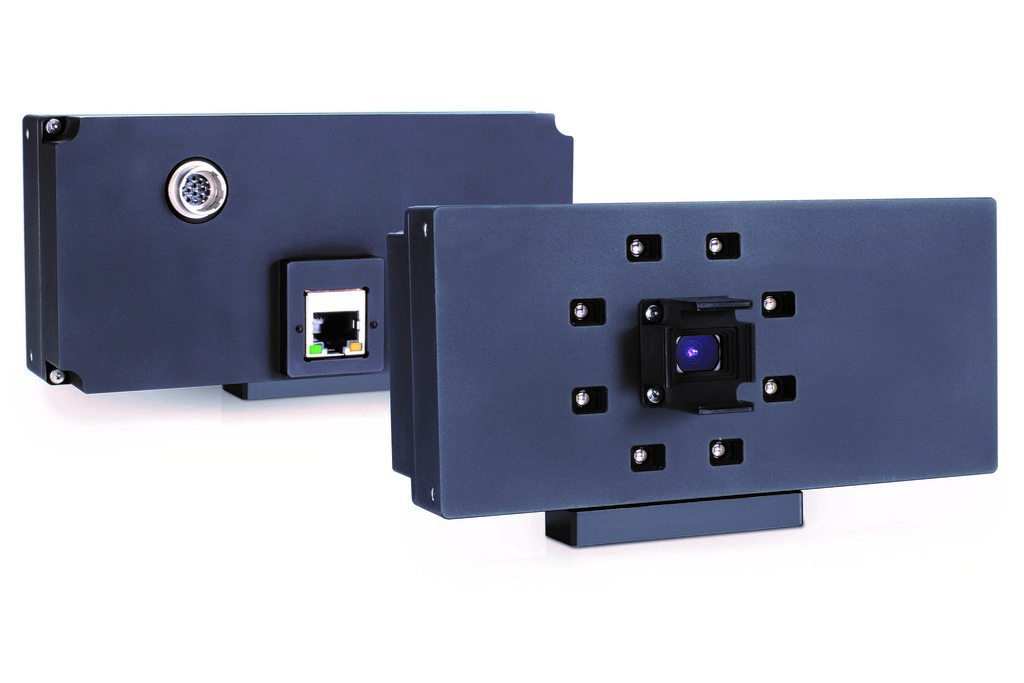 The intelligent driver-less ‘reach trucks’ developed as part of the research project learn to orient and adapt themselves based on their environment.
They begin by taking part in an initial human guided tour of the facility to note all aspects of their environment. Communication with the vehicle is easily done using speech or gesture commands, easily commanding the vehicle. If a warehouse worker were to issue a command such as “Store this pallet on shelf 3”, the vehicle can interpret both the spoken word and any associated gesture. It can then reliably identify the desired pallet and perform the requested storage, fetching or re-positioning task without the need of human intervention.

The experimental technology can be used for identifying transportable goods and permitting them to be picked, transported and deposited at their destination through smart autonomous reach trucks. The vehicles are very easy to operate meaning one single warehouse worker can control multiple vehicles at once.
3D Time of Flight camera technology 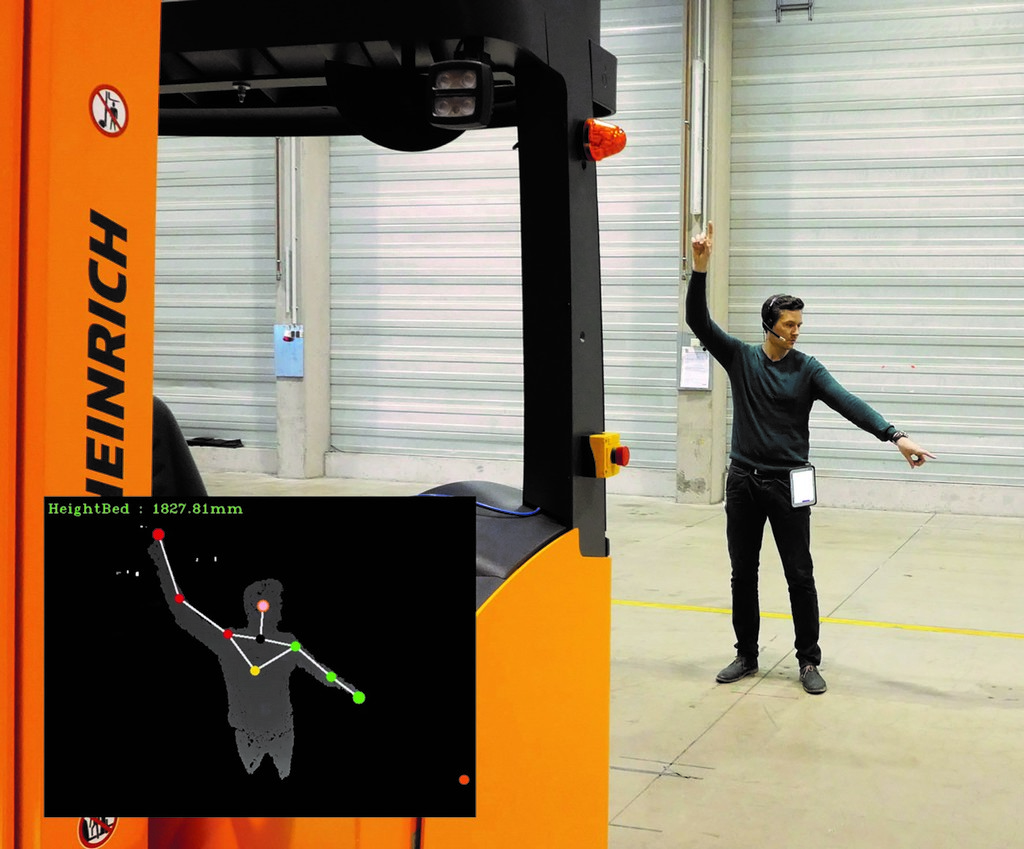 Time-of-flight camera technology provides an effective way to capture 3D shape and volume measurements ideal for driverless-vehicles technology. Both light source and image acquisition are synchronised in such a way that the distances can be extracted and calculated from the image data. Basler (Germany), time-of flight camera manufacturer, describes the principle as similar to the way dolphins use sonar to navigate, except the camera uses light and not sound.

Each ‘reach truck’ utilises three Basler 3D Time-of-Flight cameras. Each individual camera takes a three dimensional note of its environment, ensuring that its spatial perception is correct. Two cameras are mounted on the roof to allow for free movement in all directions. The reach truck take note of any landmarks within its environment, establishing an internal map. Any changes in the environment are immediately noticed, such as when a shelving unit is re-positioned or any barriers are located in its path and reacts to these problems appropriately. If there were a barrier blocking its path, they would edge around it the same way a human would.

The third camera is a modified Basler Time-of-Flight camera mounted on the reach arm. This is required to ensure accuracy when picking up pallets. The 3D data delivered by this camera ensures that the reach truck navigates precisely into the pallet on the first try, without the need for human guidance.