Storage and materials handling company BITO has installed its PROflow Active pallet live storage system in Miavit’s new distribution centre. The system is helping the animal feed producer save hundreds of thousands of Euros at its distribution centre in Essen, Germany, which Miavit established to minimise delivery times and eliminate pick errors 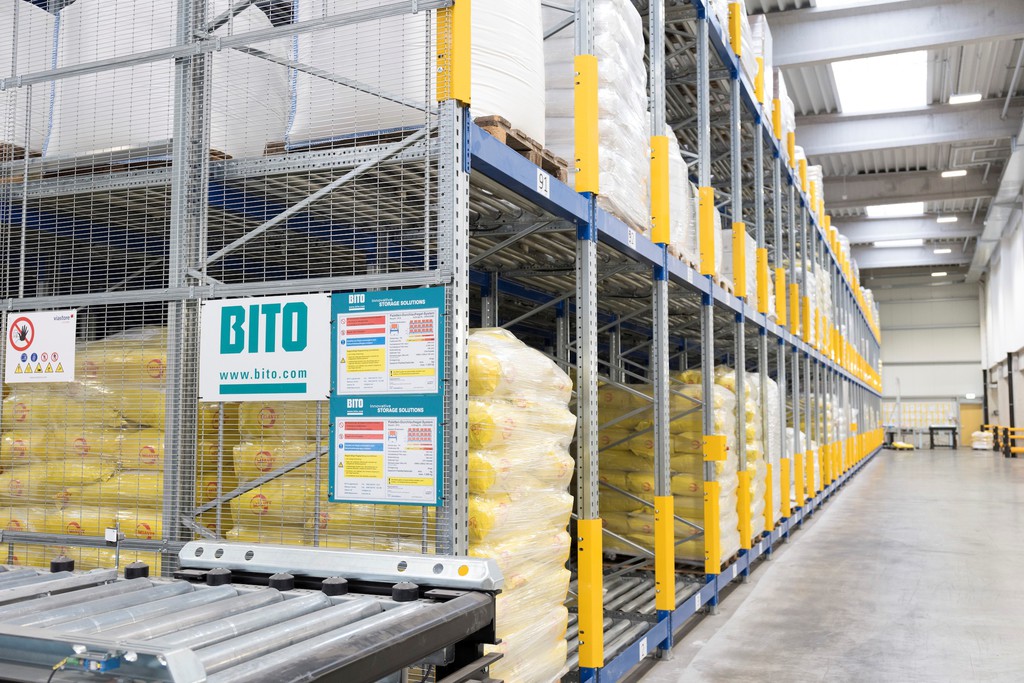 Instead of using brake rollers, the pallet live lanes have motorised rollers, which help pallet start-up and control travel speed within the lanes. This maximises pallet availability at the pick face and guarantees that pressure sensitive goods are not damaged. Being motorised, the lane rollers allow the facility to operate with 50% of the usual lane incline, creating room to accommodate more pallets. This has resulted in Miavit saving hundreds of thousands of Euros.

The family-owned company supplies customers around the world from its site at Essen. However, it hit a limit with its existing distribution centre.

Alexander Schröer, head of the Miavit technical department, says: “We operate several manufacturing plants. Most customer orders were picked more or less manually”. This was the problem, because apart from an error rate that was too high, there was not enough space in existing halls for the introduction of lift trucks. The company management decided to build a new distribution centre. “One of our main concerns was to collate the premixed feeds coming from various plants into customer-ready orders. The aim was to cut down delivery times as far as possible and, above all, eliminate pick errors," adds Schröer.

After examining solutions from various providers, Miavit opted for BITO, having previously worked with the company on a narrow aisle facility. To facilitate company growth, the new Miavit project was larger and more demanding: the envisaged facility was to accommodate various pallet types carrying different load carriers with products of different bulk density. “Bulk good density can be anything from loose to compact,” Schröer explains. It became obvious at a very early stage that a pallet live storage facility was the best solution for Miavit’s needs.

A major consideration was that on account of the lane slope, pallets would tend to run into each other, causing damage to pressure sensitive products, particularly in the case of overhanging pallet loads. “Another important aspect was that the product range also includes hazardous goods. This meant that from a certain racking height, strict safety regulations had to be observed, which included sprinkler installation,” says Schröer.

The advantage of BITO’s PROflow active pallet live storage system is that rather than being gravity-driven, pallets move from the loading to the picking side with the help of electrically powered conveyor rollers. Each pallet position is supplied with one active roller. This intelligent roller triggers pallet start-up at the beginning of a lane and regulates pallet speed within the lane. In addition, drive sensors monitor pallet spacing to prevent pallets running into each other. “This allows us to reduce lane incline from the usual 4 to 2%,” explains Alexander Lang, BITO product manager.

The space saving is considerable: a smaller lane incline often enables an additional storage level, which in Miavit’s case means its three-tier pallet live storage facility is no more than 7.5m high. Another advantage is that pallets, no matter what their weight, move at a constant speed on BITO active rollers. Lightweight pallets as well as heavier units of up to 1500kg can be loaded into the same lane without risking in-lane jams.

Alexander Schröer is very pleased with the three-tier live storage facility and its 30 lanes. “There are no dividing service aisles within the racking block,” he says. “This increases storage density and maximises space.” As soon as goods come in, they are transported from swap trailers to the conveyor belts by lift trucks. The system scans the barcodes and checks pallet weight and quality. Pallets are then moved on conveyor belts to the stacker crane at the loading side of the racking block and are automatically loaded into the correct lane. They travel gently down the lane without the risk of getting stuck because every pallet position has been equipped with one active roller.

When a pallet is retrieved at the picking side by a lift truck, PROflow Active sensors will delay subsequent pallet movement down the lane by 10s before the next pallet moves into the front pallet position. This means that pallets can be safely retrieved without lane pressure.

“Thanks to the PROflow Active system, pallets can be supplied in less time to our production lines,” says Alexander Schröer. Some 50 pallets a day can now be handled in the new logistics centre. Schröer concludes: “Just a few months after our pallet live racking block went into service, our capacity utilisation ratio was at 85%.”