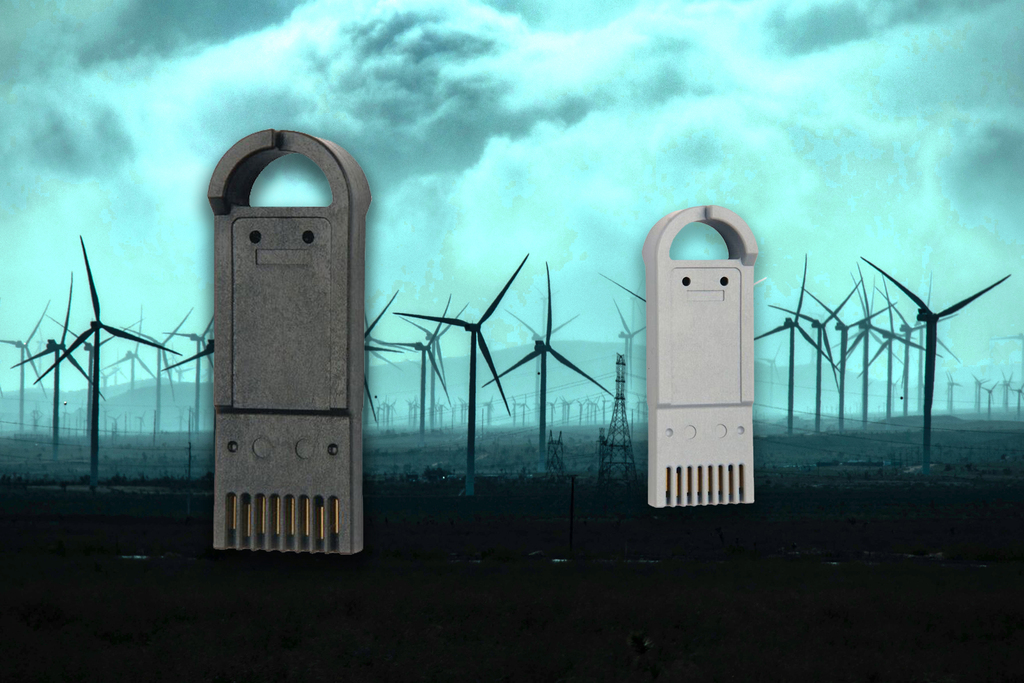 With solar and wind farms typically sited in remote locations, data transfer – for data logging or configuration purposes, for example – cannot always be done through wired connections. Furthermore, wireless is seldom an option because of lack of network coverage, or it is simply not desired for cost or security reasons. Accordingly, removable memory devices are employed.

For instance, variable-pitch blade wind turbines must be provided with operational limits to protect themselves from damage in high winds. When the turbine starts to exceed its rated power, its microprocessor- based controller will adjust the blades’ angle of attack.

Removable memory devices are also used for data logging purposes, as large wind turbines have condition monitoring systems that use accelerometers mounted to the housing of the gearbox and other drivetrain components to record vibration levels.

Digital signal processing techniques are used to transform vibration levels (sampled in the time domain) into a frequency spectrum; i.e. a signature of amplitude (Y-axis) versus frequency (X-axis). Changes in that signature over time are typically indicative of the gradual wear of a component (a bearing, for example) whereas a sudden change might be indicative of a broken gear tooth. Even when remote monitoring is possible, the local storage of data is a common practice.

Understandably, wind turbines operate in harsh environments. They experience temperature extremes and high moisture levels. Arguably the harshest condition the electronics must endure is vibration, and the electrical connection established between any removable memory device and its receptacle must be sound.

For example, a USB 3.0 type A connector has an insertion force of 35N maximum and an extraction force of 10N minimum. Industrial removal memory devices are available that have similar insertion and removal mechanisms (i.e. slot in and out) but which are certified to military vibration test standard MIL-STD 810F, Test Method 514.5. Some are also tested to MIL-STD 810F, Test Method 509.4 Proc. 1 (salt and fog), which will be of benefit in offshore and coastal windfarm applications.

With the life expectancy of a wind turbine circa 20 years, and because of lack of easy access once operational, care must be taken when designing in all system components.

For example, one of Nexus Industrial Memory’s customers recently subjected a Datakey serial removable memory token and matching receptacle to Highly Accelerated Life Testing (HALT) to simulate 20 years of operation in a turbine’s nacelle. The HALT included intense and rapid temperature and high vibration level cycling. Other than there being wear on the contacts, the device retained its electrical integrity and functionality.

The ‘token’ is just one of a number of bespoke form factor removable memory devices designed and manufactured by ATEK Access Technologies - for which Nexus is the exclusive distributor for its Datakey range in the UK, Ireland, Germany, Switzerland, Austria and Scandinavia – intended for industrial and harsh environment applications.

Industrial memory devices are also employed on large-scale solar farms. For instance, the health of the power inverters tends to be monitored as part of the operator’s predictive maintenance strategy. Whilst remote access to the inverters tends to be easier than accessing the data logging equipment in wind turbines, local storage is still desirable. The devices are exposed to temperature extremes and, in some cases, must operate in environments where sand and dust are an issue; and for this reason, devices that have been tested to military standards are often used.

However, a more common use for removable memory devices on solar farms is for user authentication during maintenance. This introduces another consideration when designing an embedded system for use in the renewable energies sector; the frequency with which the devices will be inserted and removed.

Commercial USB (devices, receptacles, leads etc.) are rated at 1,500 insert/extract cycles minimum; i.e. you are likely to get more than that, but it is not guaranteed. Conversely, industrial memory devices and their corresponding receptacles are rated much higher, at 200,000 cycles in some cases.

Granted, maintenance is not an everyday task, so 1,500 cycles should be adequate, but the higher cycle rating of industrial devices is a measure of their durability and ruggedness. There is also the security aspect of the device’s form factor to consider. Essentially, the device is being used as a key to access expensive electric equipment; and large-scale solar and windfarms are increasingly being regarded as ‘critical infrastructure’ and security is becoming ever more important. Is it wise to use something as widely available as a USB memory stick, for example?

If lost or stolen, an industrial form factor memory device will be hard to interrogate without a corresponding receptacle; and both devices and receptacles are only available through authorised distributors, such as Nexus. By the same token, is it wise to have a standard USB port on the panel of, or inside, any site equipment? A USB port is a doorway for hackers, whereas a bespoke form factor receptacle will only interface with a corresponding removable memory device.

In addition, industrial grade receptacles are available that are IP67 rated, where the ‘6’ denotes totally protected against dust and the ‘7’ denotes the measure of protection against temporary immersion in water.

In conclusion, removable memory devices have their uses in the renewables energy sector. It is a harsh environment though and commercial solutions will not fit the bit, which is why engineers are turning to military-grade solutions. There are many form factors to choose from, such as the token that was HALT tested for use in in wind turbines, and the core memory technology will either be EEPROM or flash (NAND or NOR) and interface protocols include SPI, I2C and Microwire.

Moreover, though we have flagged the unsuitability of USB as a form factor (i.e. USB memory sticks and USB receptacles) in the renewable energies sector, at the silicon level, the technology is sound; and devices, rated up to IP67, are available that deliver USB flash drive (or SD card) functionality. This means all development work can take place as if USB were going to be used then, once the system functionality is proven, it is just a case of switching to industrial form factor devices and receptacles.