DECADES OF combined experience in manufacturing techniques and tooling has seen the Advanced Manufacturing Research Centre (AMRC) overcome one of its biggest challenges to date – machining an aircraft bogie beam and axle assembly that aims to be 20% lighter to improve the efficiency of landing gears and support the vision for cleaner aviation. 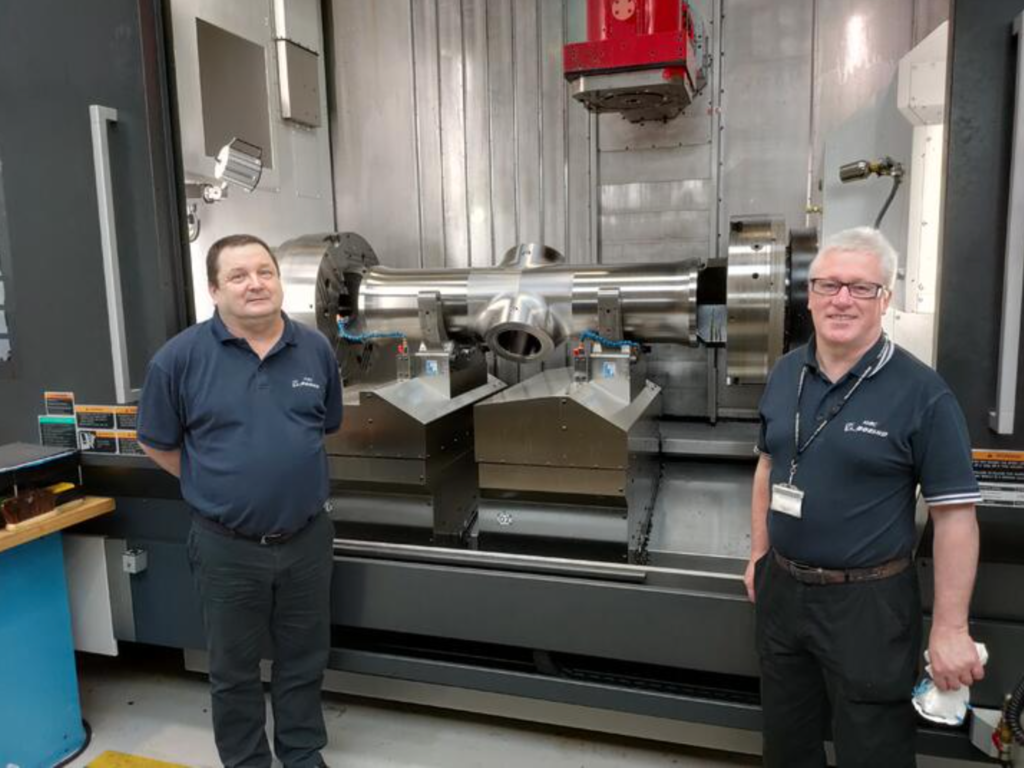 A team of University of Sheffield AMRC engineers were tasked with machining the aerospace components, which connect an aircraft’s tandem wheels, as part of the £22.5m Large Landing Gear of the Future programme led by Safran Landing Systems and part-funded with £12.7m from Innovate UK.

A 10-strong consortium of partners and subcontractors drawn from UK industry are collaborating on the six-year project to develop, mature and demonstrate key technologies that will improve the efficiency of aircraft landing gears in their design, manufacture, operation and cost. The consortium includes the University of Sheffield, the AMRC and fellow High Value Manufacturing (HVM) Catapult centre the National Composites Centre (NCC).

Phil Kirkland, Head of the AMRC’s Machining Group, says the work undertaken by his team has – quite literally – been one its biggest machining challenges in recent times and represents a major step forward for the group.

Dan Smith, technical fellow in the Aerostructure and Landing Gear Team at the AMRC, explains: “We’re in charge of manufacturing the gears. Safran radically redesigned their bogie beam and axles and coupled this with a revised material supply, which they believed would create a structure that is 20% lighter than its predecessor and will increase time between overhaul (TBO) from 12 years to 20. Our role, through part manufacture, is to bring their vision to life, highlighting where technology gaps exist and advising on designs where economic processes cannot be found.”

Steel and aluminium are widely used in landing gear components. However, Safran asked the AMRC to machine two bogie beams from a titanium alloy which is stronger, more robust and lighter.

Smith says with those qualities come significant obstacles: “The titanium alloy has great mechanical properties, but it is seldom used in aerospace because it is so difficult to machine. It is so unforgiving and often leads to rapid onset accelerated tool wear. For context, if you were to do something wrong in aluminium, which is used in large parts of an aircraft’s structure, the tool would generally survive; if you do something wrong in this titanium alloy, the tool is gone – it is in bits.

“We had to use all our experience in manufacturing techniques and tooling to machine these components and really push the boundaries of what is possible. Before even a spindle had turned, a lot of time was invested in virtual machining, so when we did fail, we did so in virtual space and not on a value-added component. Then, when we ported the process onto the machine tool, the part geometry demanded complex toolpaths at increasingly long tooling assemblies, something we as machinists try to avoid wherever practical.”

Those novel machining methods needed to be used in an unfamiliar environment as Dan’s team moved production from their usual home at Factory of the Future on the Advanced Manufacturing Park in Rotherham to the AMRC’s sister centre, Nuclear AMRC, to use the Mori NT6600, one of only two mill turn platforms on the site capable of accommodating the component.

A first off bogie beam manufactured in the titanium alloy has precisely met Safran’s demanding expectations.

Neil Deighton, program manager for Research and Technology at Safran Landing Systems, said: “This is a very ambitious project. We are exploring radically different approaches to landing gear design in order to achieve the required weight and TBO goals expected by the market in coming years, and to support the cleaner vision of aviation.

“These new designs require novel machining techniques that the AMRC are exploring and refining on our behalf, in order to pass on best practice on new methods of manufacturing at the end of the project. The project has presented many challenges, but also many opportunities for Safran and the AMRC to learn through working together.”

The next stage of the AMRC’s £2m programme of work is to machine the axles that will be assembled to either end of the bogie beam.

Smith continues: “The axles are in production now on the Factory of the Future shop floor. They went into production at the same time as the bogie beam but are far more complex. We hit the bogie beam requirements precisely so now we’re looking to see how close we can get with the axles.

“Once the parts are finished, we will send them to Safran who will assemble them into place. They will then return to the AMRC where we will finish the machining of the bogie beam and axle assembly at Nuclear AMRC on the Soraluce FX12000.”

Phil Kirkland, head of the AMRC’s Machining Group, adds: “This project has been running since 2017 and the team have had to overcome enormous challenges to get to this point. Not only have they worked with new designs and novel machining methods, they have also worked off site and during the Covid-19 pandemic.”