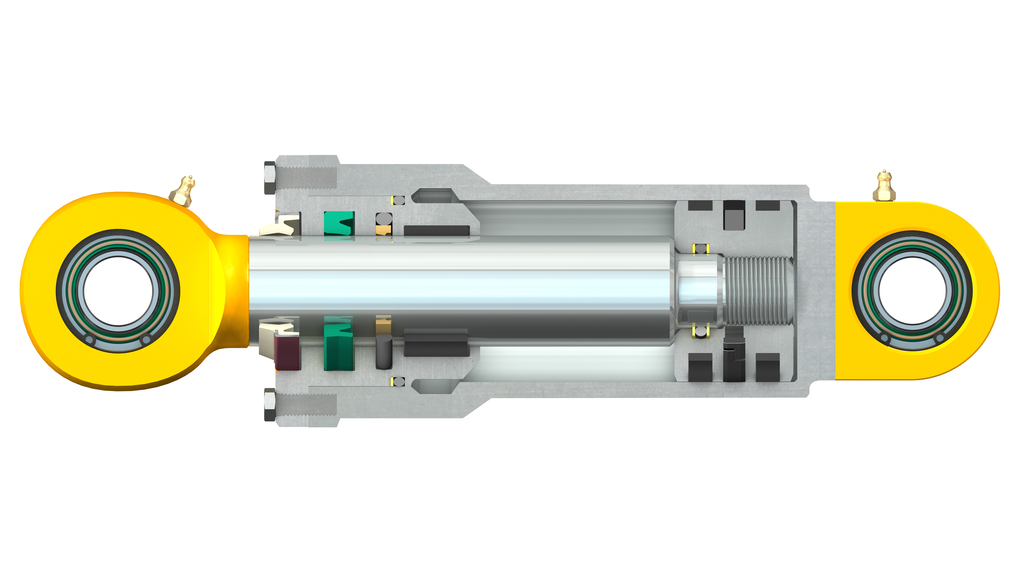 Hydraulic machinery is commonly used in critical applications, in industries such as construction, agriculture and materials handling.

While electrically powered equipment has gained in popularity, the sheer power generated by hydraulic systems means they remain in demand. A recent report on the global hydraulic cylinder market estimates annual growth of almost 5% – taking total value beyond $18 billion by 2025.

The expanding mining and construction industries are among the key factors driving this growth, says the report from Research & Markets. Rapid industrialisation and urbanisation – especially in emerging nations – has increased demand for hydraulic equipment such as backhoes, trenchers and asphalt laying machines. At the same time, farmers are replacing traditional manual equipment with hydraulic devices to enhance the efficiency of agricultural operations.

Maintaining hydraulic machine performance is vital, for both safety and economic reasons. A small – but vital – component that facilitates the smooth running of these assets is an effective hydraulic piston seal.

Piston seals maintain sealing contact between a piston and cylinder bore. The moving piston rod generates high pressure on the piston seal which increases contact forces between the seal and cylinder surface. Because of this, surface properties of the seal are critical to sealing performance.

Designing these seals requires a fine balance between friction and sealing. If the seal allows too much fluid to leak from the high- to the low-pressure side of the cylinder, performance is affected. However, excess friction on the cylinder wall accelerates wear – and reduces operating life.

Failure of a hydraulic piston seal (blow-by) can cause machinery to lose control of its load – with huge operational and safety implications. Yet piston seals face a range of operational and materials engineering challenges that limit their performance. For instance, external forces on the piston rod can cause sudden pressure peaks, far in excess of the system’s operating pressure. This can press a piston seal into the gap between the piston and bore – damaging the seal and affecting both seal performance and cylinder operation.

Piston seals are usually made from PTFE, as it has many suitable properties – including very low static and sliding friction characteristics and high chemical resistance.

PTFE is well known as a highly lubricious material – a key characteristic for a piston seal. However, PTFE seals can have a number of limitations. Most notably, the material’s limited elasticity means that PTFE seals can be difficult to install without damage. PTFE seals need special sleeves to stretch them prior to installation. Afterwards, they must be calibrated back to the correct diameter – a process that increases time and cost for equipment manufacturers and maintenance teams.

In addition, PTFE’s relative lack of elasticity restricts its ability to revert to its original shape under continually reversing loads. This can cause the seals to become misshapen which reduces sealing performance.

The limitations of PTFE seals meant that an alternative material was needed, which could maintain durability and flexibility on a range of challenging applications.
SKF launched a project to do this, based on its Ecopur thermoplastic polyurethane (TPU) material. As well as using TPU, the company also redesigned the seal to improve its performance.

Developing the new seal required far more than simply replacing PTFE with TPU. The large extrusion gap between piston and cylinder wall requires a material with enough extrusion resistance to hold its shape under all operating conditions. Tests of early TPU prototype seals were unsuccessful – as the hardest available grade of material was not hard enough. So, the company developed a special TPU grade that had the necessary durability.

To test it, SKF carried out a series of static extrusion tests, attempting to push samples of the material through extrusion gaps of various sizes. Samples were kept in the fixture for two weeks at temperatures of between 60–100 °C. At the end of the test, the permanent deformation of the samples was measured – and found to be superior to commercially available alternatives.

The next step was to create the correct sealing geometry with this new material. This was done using finite element techniques, rapid prototype development (using CNC machine tools) and physical testing on custom-made static and dynamic test equipment.

The iterative process led to a final seal design. Here, the geometry of the outer surface of the TPU slide ring has a shallow ‘M’ shape with two carefully designed sealing lips.

A seal profile with pronounced sealing points was found to provide more effective sealing forces than a flat surface. This improved seal performance while reducing the amount of frictional drag created by the seal. Also, concentrating the forces on two sealing edges rather than one prevents the seal from tilting in use – a common cause of early failure.

Another refinement relates to the seal energiser. This softer rubber component sits beneath the TPU glide ring inside the piston groove, pushing the glide ring against the cylinder’s inner wall. On light duty seals, the energiser is a simple O-ring; designs for medium- and heavy-duty use a specially shaped nitrile rubber energiser.

The new design adds side vents to the radial side walls of the slide ring to enable pressure activation of the energiser. Now, the seal can shift position rapidly as the direction of pressure changes – reducing the potential for blow-by and loss of cylinder functionality. Side vents also reduce the risk of a pressure trap occurring when the slide ring seals against the radial walls of the seal gland. Again, this can cause a loss of cylinder functionality.

While PTFE seals are still commonly used in many piston sealing applications, alternatives – including those made from TPU – are available when higher performance is required.