Reliable operation of fans and blowers is often critical to production or process operations.Here, Phil Burge,marketing manager at SKF, looks at how the uptime of such equipment can be increased through integrated bearing, 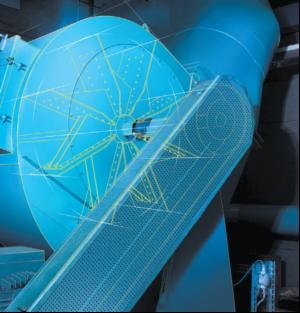 Reliable operation of fans and blowers is often critical to production or process operations.Here, Phil Burge,marketing manager at SKF, looks at how the uptime of such equipment can be increased through integrated bearing, seal and lubrication technologies

It is essential that fans and blowers can withstand demanding environments, while providing high performance, often at their limit, and low cost operation. The typical high rotational speeds equate to high operating temperatures and as fans are often used to evacuate hot gases, these temperatures can range from 100 to 600Â°C. Naturally, some of this heat is transferred to the systems' components via radiation and conduction in the fan shaft, in particular bearings.

Operating under such high temperatures can lead to bearing failure, causing unplanned stops and production losses.

In addition, high operating temperatures can have a negative impact on bearing lubrication, reducing the service life of the base oil.

Degradation of lubricate results in increased friction in the bearings, increasing the risk of potential bearing failure still further. Indeed, more than a third of all premature bearing failures are caused by lubrication problems.

Despite these factors, the maintenance of industrial fans and blowers is frequently neglected, leading to inefficient operation, faster wear, greater energy consumption and, potentially, unexpected failure.Maintenance is often an area that is delayed until absolutely essential; however, it cannot be delayed forever and one option is to consider upgrading fans and blowers, to improve their performance and functionality and to extend maintenance intervals.

An effective upgrade typically includes higher specification bearings and seals; combined with an improved self-lubricating system and, depending on the nature of the production operation, condition monitoring devices so that future maintenance can be accurately predicted.

Some manufacturers have developed a complete solution for upgrading industrial fans and blowers, making it possible to standardise the procedure. For example, SKF has devised an upgrade to reduce operating temperatures by utilising optimised bearings and housings and a new circulating oil lubrication system, resulting in increased reliability, extended service life, lower maintenance costs and reduced environmental effects.

A complete industrial fan upgrade typically starts with a functional analysis of the equipment to evaluate problems and identify how an upgrade should be carried out. This will determine which parts are most suited to the application, allowing an engineer to specify the necessary components to improve performance. These could include a new circulating oil lubrication system to reduce operating temperatures and the need for maintenance, a self-aligning bearing system that generates less friction, and specially designed housings, which are optimised for use with circulating oil lubrication. A condition monitoring system may be recommended to warn of bearing failure.

SKF's bearing system has an SKF Explorer spherical roller bearing in the locating position and a CARB toroidal roller bearing in the non-locating position. The CARB bearing is a self-aligning radial bearing with an inner ring that moves independently of the outer ring, similar to a cylindrical roller bearing. This lets the system accommodate shaft elongation within the bearing without inducing internal axial loads, resulting in less friction and lower operating temperatures. It operates with reduced vibration and noise and enables safer, more efficient designs.This leads to extended relubrication intervals and extended bearing service life.

Alongside the self-aligning bearing system, a range of sealing and lubricating solutions can be used to further increase system performance and reliability. Lubrication is an essential part of preventative maintenance, providing cool, clean oil for each bearing to help reduce operating temperatures. It can be handled in different ways, to suit the application, including manual grease lubrication and centralised grease lubrication. It can also include automated lubrication systems, which ensures bearings are correctly lubricated at all times, without the need for manual checking and application procedures.

To ensure optimum performance of industrial fans over extended service lives, condition monitoring and predictive maintenance can also be used. One such system is SKF's Copperhead which enables early detection of unbalance, mechanical looseness, bearing faults or high temperatures. This allows remedial action to be taken promptly before performance is degraded. Furthermore, handheld analysers are available for simple analysis and reporting.

It is vital that industrial fans and blowers consistently perform to the highest standards.