THE NINTH Tomorrow’s Engineers Week will take place from 8 to 12 November 2021. Engineers will demonstrate the active and vital role that engineers and technicians have in achieving net zero to young people. 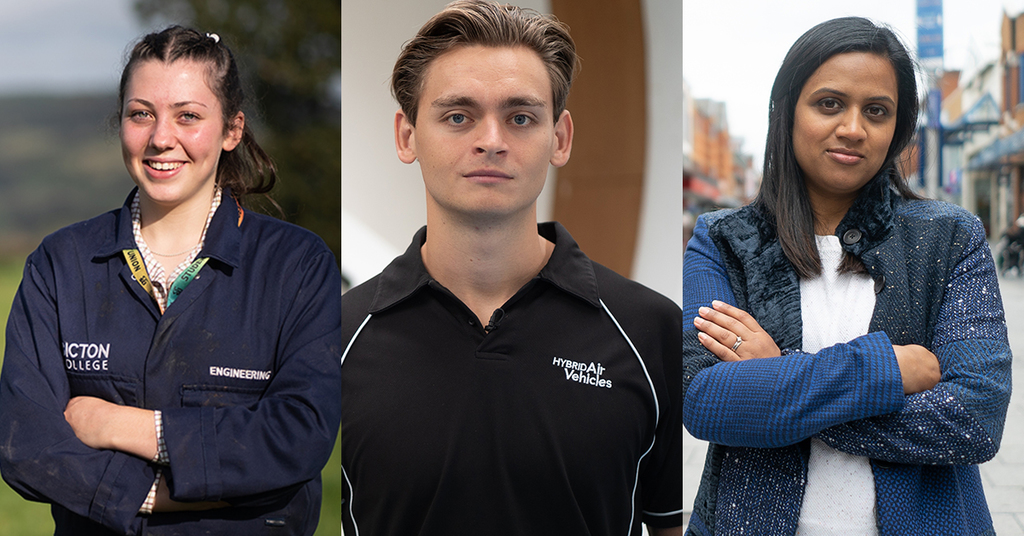 Tomorrow’s Engineers Week has kicked off with a series of films showcasing the engineers that are at the heart of solutions to achieve net zero by 2050.
The engineers featured are working on making farming more energy efficient, reducing high street energy consumption and delivering aircrafts with zero emissions.
Three engineers from across the UK were handpicked to showcase their stories of being 'Net Zero Heroes' to celebrate Tomorrow’s Engineers Week. The week aims to inspire a new generation into the profession.

Jaz Rabadia MBE (pictured, right), who helps businesses reduce the amount of energy that they use and lower their carbon footprint, said: “When deciding what I should study at university, I researched engineering and I realised how important it is in making a difference to the world and to bettering people's lives. I knew then that, by studying engineering, I could help make a difference.”

Nathanael West (pictured, centre), engineer at Hybrid Air Vehicles is helping to deliver an aircraft with zero emissions by the end of this decade. Nathanael said: “I thought about becoming a pilot, but at some point I realised that being a pilot is all about following procedure and trying to avoid challenging situations as much as possible. And I like to think of new ways to solve problems, and that's what engineering is all about, so I'm glad I made that decision.”

Dr Hilary Leevers, Chief Executive at EngineeringUK, the organisers of Tomorrow’s Engineers Week, said: “The engineering community is already working to pay back the planet with solutions to address a host of problems, such as how to generate affordable and sustainable energy, to shaping the farms and cities of the future.
“But we also need to focus on the next and future generations - allowing them the space to be creative and equipping them with the technical skills to bring innovative solutions to life. And they are up for the challenge, they are optimistic about what can be achieved in the future, and passionate about improving the world they live in.”

The films will be promoted to young people across social media and used by schools through teaching resources available at teweek.org.uk.

Now in its ninth year, Tomorrow’s Engineers Week takes place from 8 to 12 November 2021 and highlights to young people that engineering is a creative, problem solving, exciting career that improves the world around us and is playing an active part in achieving net zero.

Examples of engineers making a tangible difference were highlighted as part of This is Engineering Day. They include Extreme E electric racing series performance engineer, George Imafidon and entrepreneur Lucy Hughes who has developed a compostable alternative to plastic film.

Further highlights of the week include the first Tomorrow’s Engineers Week Schools COP where students around the country are coming together to discuss the importance of achieving net zero and how engineers behind technological and scientific breakthroughs will be at the heart of the world’s response to climate change in the coming years.

In the past three years alone, Tomorrow’s Engineers Week has seen over 130,000 young people take part in interactive engineering activities, almost half a million views of inspiring films about engineers on a mission to make the world a better place, hundreds of millions of social media content views and widespread media coverage.