A recycling company has been fined £180,000 after a worker was killed on his first day at work when the forklift truck he was driving overturned. 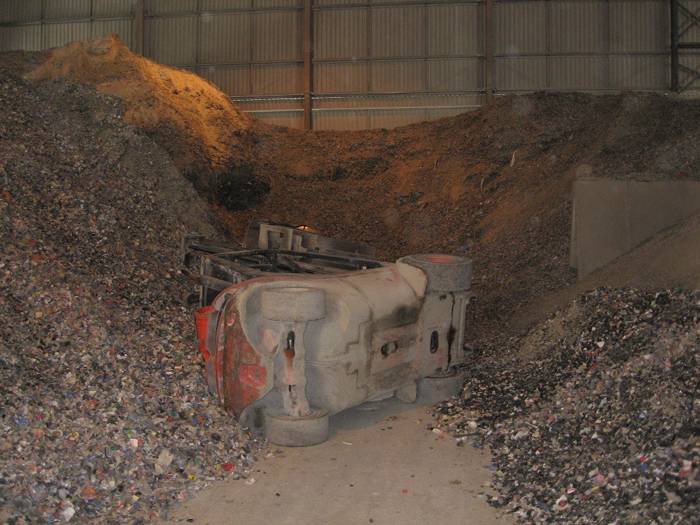 Ian Aliski, 29, from Ellesmere Port, was using the forklift at Recresco Ltd’s glass recycling plant in Manisty Wharf, North Road, Ellesmere Port, on 26 April 2010 when the vehicle overturned, crushing him to death.
Liverpool Crown Court heard that Mr Aliski had been hired on a temporary four-day contract and was just a few hours into his first day when the incident happened.
Recresco Ltd was prosecuted by the Health and Safety Executive (HSE) after an investigation found that forklift truck drivers regularly had to work in an area that was often covered in waste materials. This prevented them from turning the vehicles safely.
On the day of the incident, Mr Aliski was moving waste material from the recycling process – known as aggregate – from the production area to a storage shed when the forklift truck became unstable on the uneven surface and overturned.
The court was told that Mr Aliski was not wearing a seatbelt and there was no company policy in place to ensure seatbelts were worn.
HSE’s investigation also found that the forklift trucks in use at the plant were not suitable for operation on uneven surfaces or over loose material such as that found on the site.
Alternative vehicles, such as four-wheel-drive, all terrain shovel loaders, could have been used and were already in use elsewhere on the site. Since the incident, the company now uses these vehicles to move all the waste material on the site and it is now company policy for seatbelts to be worn at all times in all vehicles.
Recresco Ltd, of Lane End, Urban Road, Kirkby-in-Ashfield, Nottingham, was fined £180,000 and ordered to pay £38,693 in prosecution costs after pleading guilty to a breach of the Health and Safety at Work etc Act 1974 on 17 December 2014.
Speaking after the hearing, HSE Inspector Martin Paren said: "Ian was just a few hours into his first day at work for Recresco Ltd when this tragic incident occurred.
"Our investigation revealed a series of failures at the plant, with forklift trucks being used in an area that was completely unsuitable because of the uneven surface created by waste material scattered around the floor. There was also no policy in place for the use of seatbelts.
"Sadly it was entirely foreseeable that someone was at risk of being badly injured or killed. If the company had taken some simple measures to reduce the risks, such as using the all-terrain vehicles in use elsewhere on the site, then Ian’s tragic death could have been avoided.”
MORE FROM THIS COMPANY