Mitsubishi Electric has expanded its iQ automation platform with the launch of two new ranges of controllers – the MELSEC iQ-R programmable automation controllers (PACs) and the MELSEC iQ-F range of compact PLCs. Each of the new products addresses different segments of the machine control, process control and automation markets, and both ranges benefit from unified interconnectivity with other iQ models, a unified programming environment and an improved user experience. 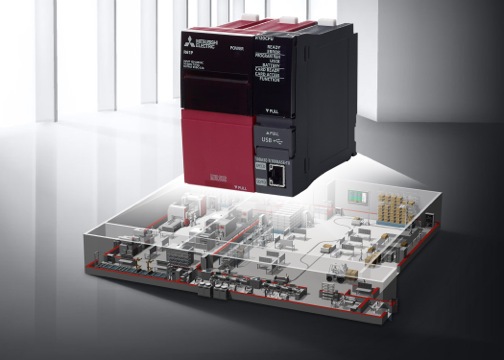 The MELSEC iQ-R provides a PAC platform that is said to bring substantial added value while reducing total cost of ownership, enabling users to build automation systems that ensure high levels of productivity and consistent product quality. It has been developed from the ground up to address user issues focused on increasing productivity and reducing development costs, maintenance effort and operating costs. At the same time, Mitsubishi says improved processing performance will guarantee increased security, enhanced safety, reliable production processes and reduced downtime.

Designed to meet the needs of ‘Industry 4.0’ automation concepts, the iQ-R incorporates a number of features including embedded database functionality. This enables recipe, batch or other process data to be stored in a user-friendly format and provides information, for example, for optimising production or preventative maintenance.

The iQ-F series builds on the legacy of the FX series of PLCs and will extend over the coming years, offering even more choice in the compact PLC range.

The first model in the iQ-F series is the FX5U. This continues the FX tradition of total flexibility by offering a wide range of new and existing add-on options which enhance the built-in functions of Ethernet, analogue I/O, data logging, position control, security, communications and networking functions incorporated as standard. The FX5U will provide users with the ability to specify more powerful systems but with fewer overall components.

The FX5U offers functions such as motion control, data logging and sophisticated security features which Mitsubishi Electric says have previously only been available on larger PLCs.

Both the iQ-R and iQ-F controllers are programmed using new GX Works3 software which provides an intuitive, graphical, structured programming environment. GX Works3 offers a wide range of programming options including dynamic labels, parameterisation instead of programming, and the automatic creation of hardware function blocks and visual function blocks, including HMI templates. This drag-and-drop hardware and software configuration is said to reduce overall configuration time by more than 60%, whilst the intuitive approach to programming helps reduce development costs and development errors.