The quest for easier welding

A key driver in welding machinery manufacture has been to find ways to make welding simpler for the operator and more predictable.ESAB outlines some of the developments that have made this possible Welding used to b 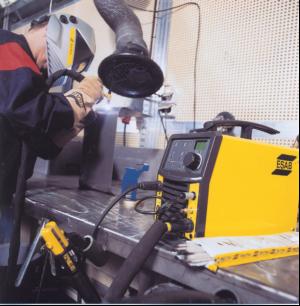 A key driver in welding machinery manufacture has been to find ways to make welding simpler for the operator and more predictable.ESAB outlines some of the developments that have made this possible

Welding used to be a highly skilled business.

Not so long ago people took lengthy apprenticeships to learn the art. That doesn't happen very often these days, though there remain many highly skilled welders out there. The welder still needs to learn a lot, if only to master the health and safety requirements but, in theory at least, it should be possible to create more or less the perfect weld simply by getting the settings on the equipment right.

Manufacturers such as ESAB have made consumables and welding sets easier to use partly by adding a whole raft of special functions. These give the operator added control over the weld. The sets are now so good that operators get more time to do the job, making it easier to get it right.With aluminium welding, the sets now make it possible to clean the material so well that it becomes a much easier job.

MIG and MAG The two most common processes are called MIG and MAG. MIG stands for Metal Inert Gas and MAG for Metal Air Gas.With MIG you have a reel of wire (a simple welding consumable) that is pulled through a feed roll system up a MIG torch. At the end of the torch there is a contact tip where the wire picks up the current provided by the machine. This contact area is gas shielded to stop oxygen attacking the weld. If oxygen gets in, the result can be corrosion.

The operator has to set the voltage needed to burn off the wire. That may require a little practice. Basically it's a combination of setting wire feed speed and voltage to suit.

The MIG sets have a contactor in them. Nothing will happen at the end of the torch until the operator presses the trigger. That starts the wire feeding and turns on the gas. As soon as the wire touches the material it arcs because it creates an electrical circuit. The return lead coming from the piece being welded goes back to the negative terminal on the set, creating a circuit.When it arcs the operator keeps the torch a set distance from the material and moves along at an even rate. It's possible to either push or pull the torch.

TIG Aluminium welding calls for a different process called TIG (Tungsten Inert Gas). For TIG the set has to be capable of producing alternating current to break through the oxide field on the surface of the aluminium. TIG is slower than MIG but produces an extremely high integrity weld with a very good finish, which is highly desirable when working on high performance cars. The operator also has a lot more control when it comes to the TIG process since the process involves holding a torch in one hand and filler wire in the other.With MIG it's all done in the torch.

The electrical technology of the sets has also changed with inverters becoming the established system. This means an end to the large step voltage transformers, so the sets are smaller, lighter and can have extra added functions. This added functionality includes pulsing, which allows the operator to set a peak current and a background current as well the duration of both peak and background. That makes for highly accurate control of the heat. Pulsing enables the operator to set a peak current for perhaps 1.5s, a time set so that it is just long enough to complete the task before the heat blows a hole in the material being welded.

Background current enables the pool to cool and solidify before the next burst of peak. Using pulses and micro-pulses it is even possible to operate in milliseconds, enabling incredibly small surfaces to be welded accurately. Imagine two razor blades welded together at the sharpest point. It could almost certainly be done with pulsing.

These sets are moving closer to the ultimate machine - small and portable but offering high amperage.Many now run on a 32A supply, some work on 16A, and there are even machines today that will run on a conventional household electrical supply.
MORE FROM THIS COMPANY