Loans now available through the Carbon Trust effectively make variable speed drives free of charge.However,some potential users fail to understand the simplicity of their installation and the benefits they bring to machine 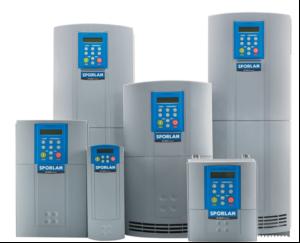 Loans now available through the Carbon Trust effectively make variable speed drives free of charge.However,some potential users fail to understand the simplicity of their installation and the benefits they bring to machine operation.

Andy Parker-Bates of Parker SSD Drives, part of Parker Hannifin, helps fill in some of the blanks

About 70% of all the electricity generated in the industrial world is used to drive motors, and these are often parts of hugely inefficient machines and systems. The wastage of power is almost beyond calculation. Reducing this waste is becoming a moral imperative because of global warming and is increasingly a financial necessity as markets become more and more competitive.

Variable speed drives offer a simple solution to this problem. Easy to fit and self-tuning, they constantly adjust the output speed of the motor to exactly match the needs of the application, speeding up and slowing down in real-time as power demand varies. The energy savings can be enormous because wastage is proportional to the square or cube (depending on application) of excess speed.

A fixed speed machine or application has to be set to a speed that will cope with worst case scenarios, plus a margin of error. A secondary mechanism is then used to cope with the excess. For instance, a ventilation fan would use louvers to divert excess flow, while a pump would use valves to recycle surplus volume.

In contrast, a drive on the motor would speed up and slow down the fan or pump to meet actual demand. It should be noted that a drive could be used in a fixed speed mode to say set a conveyor belt's speed, or in a constantly variable mode where it is dealing with intermittent machine usage or load matching to a varying demand.

Installing drives is not particularly difficult; they usually fit within existing control cabinets.Most need setting up to meet the needs of their particular application; 10 or 15 years ago this could be difficult and time consuming, but these days it is effectively transparent. The software within the drive can be set to meet given applications, pump, fan, lift, hoist conveyor; it is then run in 'autotune'mode to pick up the main parameters and operating cycle of the application.Within minutes it can be bedded-in to the application, enhancing operation, saving energy and improving competitiveness.

Energy grants The energy saving potential of drives is enormous, yet only 10-20% of motors that could benefit from drives are currently fitted with them. This figure is so low that the government want to encourage further take up, thus reducing national carbon output significantly. To do this, it has authorised the Carbon Trust to offer loans for drive installations, whether new-build or retrofit.

The purchase price of the drive can be borrowed and repaid at a rate that matches the energy savings, so it is effectively free of charge. Information is available from the Carbon Trust's website. Applications can be made online. In some cases the supplier can submit an application on a customer's behalf.

It is worth noting that many drives will pay for themselves in less than 12 months, almost all of them within 18 months, but the repayment period can be up to 4 years. Also most drives run for 5 to 10 years, meaning energy cost-savings long after payback.

Energy saving is only one of many benefits for drives. Another use is load matching. An uncontrolled motor will slow down as the mass it is moving increases, unacceptable in many lift and hoist applications. Imagine a 20 person passenger lift in a skyscraper; if the lift car were full, say at 8:55am when people are rushing to work, it would move at 5% speed; an hour later when one person wanted to go up a couple of floors it would be like a jet fighter! The same principle applies to hoists in industrial environments.

Similarly, a conveyor feeding, for example, manufactured goods from production to packaging can only be matched to production rates if there is a drive resolving speed and load calculations. Another common application is speed profiling in, for example, a centrifuge. This may start from zero, accelerate slowly to a first fixed speed for a set time, then accelerate rapidly to a second fixed speed for a period, and finally decelerate moderately back to a stop.

In summary, plant engineers should assess all motors for drive fitment to see if they could benefit from the advantages offered by today's variable speed drive technologies. Fleet control
MORE FROM THIS COMPANY