In the picture on energy loss

Thermal imaging is being widely adopted across diverse sectors to spot and stop energy loss as well as to detect electrical and mechanical inefficiencies that increase overheads.Andrew Baker, distributor sales manager of F 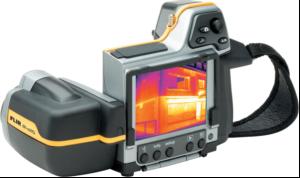 Thermal imaging is being widely adopted across diverse sectors to spot and stop energy loss as well as to detect electrical and mechanical inefficiencies that increase overheads.Andrew Baker, distributor sales manager of FLIR Systems explains

While legislation may be driving industry's focus on energy conservation, the need to optimise running costs is a priority for many companies as they strive to become leaner and fitter. Now more than ever plant and buildings need to operate with maximum efficiency and thermal imaging is proving a suitable technology in this regard.

It is now easily affordable and, thanks to its application scope, delivers an exceptionally quick return on investment. It has also become increasingly easy to apply, allowing users to do their job quicker and with greater efficiency.

It's not just advances in camera technology that are responsible for this growth.

Parallel development in PCbased analysis and reporting software as well as application specific software is becoming increasingly significant. And it's the infrared manufacturers pursuing all these aspects that are presenting industry with the greatest advantage.

The inclusion of new communication technology is also playing its part. For example, a new development allows portable meters to transfer their measurement data directly to the infrared camera via Bluetooth. And this brings much greater intelligence to the IR environment.

Users can transmit key readings such as current or voltage from a clamp meter to a camera making it possible to establish a relationship between heat and load.

Similarly in the building environment, when moisture is identified on an infrared image, an exact reading can be taken by a moisture meter and psychrometer. Its readings are then transmitted to the infrared camera and recorded on the image along with other readings such as relative humidity and ambient temperature.

Those involved in building maintenance were among the first to benefit from the introduction of sector-specific cameras with dedicated application functions. As well as a dew point alarm that detects areas at risk from condensation, building cameras are available with a relative humidity alarm that indicates a site of potential mould build-up.

The same cameras additionally have a builtin insulation alarm that identifies areas that don't fulfil insulation requirements; these areas are visualised as a coloured isotherm.

The greatest advantage of thermography however is its breadth of application and even sector-specific cameras, such as those whose primary function is building inspection, can be used to spot general thermal anomalies.

The technology is perfectly suited to a broad range of electro-mechanical, electrical and HVAC predictive maintenance tasks that combine to minimise running costs.

A major benefit in factory management is an infrared camera's ability to scan a wide area in one pass to highlight potential reliability problems. All kinds of problems show up thermally for further investigation.

Good examples are overheating connections and electrical cables or fuse problems; process valve and pump seal leakage; scale build-up in pipelines and overheating motor bearings and windings or misalignment. The technology is safe and suitable for inspecting outdoor high voltage switchgear and transformers as well as low voltage installations. And of course the target doesn't need to be excessively hot to signify inefficient performance. A problem can also be characterised by an abnormally cool temperature profile.

The wide-ranging ability of today's infrared camera gives it great cost-saving potential. It is perfectly possible for the same camera to be used to check a roof for water ingress, examine the integrity of building insulation, monitor the efficiency of underground waterpipes, inspect bearings on a motor, look for loose terminal connections in a control cabinet or study a dynamic process.

The return on investment is accelerated with every application added to the list.

A thermographer at a semiconductor plant recently described how during his normal inspection route he discovered a pipe that was abnormally hot. The pipe ran to the drain, which seemed unusual.When he followed the pipe back to it source he discovered that purified heated water was literally connected directly to the drain. An improper piping installation was corrected and an estimated £60,000 a year saved. The company had owned infrared camera for just a month and it had paid for itself several times over.

Thermographers, therefore, should always be encouraged to be curious!
MORE FROM THIS COMPANY