Automation equipment with get up and go

When it comes to handling, moving and lifting bulky products, automation technology today can certainly pack some punch. Once deemed too weighty, fragile and cumbersome to move between production lines, let alone sites, packing machinery is now designed with portability in mind giving manufacturers more versatility than ever before, explains Pacepacker Services 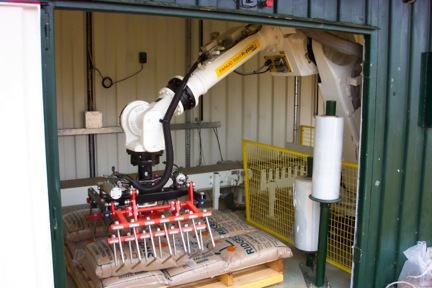 Pacepacker Services has seen a dramatic rise in the demand for bespoke and transportable bagging, pick and place and palletising solutions over the past 18 months.  Contrary to popular belief, automation equipment doesn’t need to have a fixed abode. The ability to transport machinery across a factory floor, a field or even a county enables customers, who may have previously ruled out automation due to cost concerns or inflexibility, to boost production in their plants, often with a 12 to 18 month ROI.

Belmont Farms is a great example. Handling up to 1000t of potatoes each year, Pacepacker created a ‘plug-and-play’ robotic palletising and conveyor system. Measuring 5 x 4m and weighing 2500kg, it was installed within a customised moveable frame that is now easily transportable via a fork lift on a trailer around the 13-mile long family-run farm. This flexibility facilitates expansion opportunities and is beneficial for manufacturers that have numerous packing operations across multiple or single sites.

Full line automation is often perceived as expensive – particularly if you are packing numerous products of varying consistency. Space limitations can also be a barrier that hinders a move to automation. This is something Pacepacker addressed for horse feed manufacturer F H Nash. Rather than doubling the number of systems, they minimised the automation outlay by creating a single bespoke system that toggles between two production lines to handle both dry and wet product.

Taking into account a limited footprint, Pacepacker mounted a C21 Multi-Pile Sack Placer and a Total Bag Control (TBC) bagging system onto sliding rails. Because it was only the TBC moving between lines, Nash was able to use two separate weighing systems to keep the different product consistencies apart, eliminating the risk of contamination. The TBC’s flexibility meant that as the system was moved, product recipes could be called up instantly and downtime eliminated and no matter which position the bagging system was in it fed filled sacks to the same robotic palletiser.

Many of these developments are now possible due to a rise in robotic solutions designed for packing applications. To put this in context, Pacepacker’s portfolio now comprises more than 50 palletising and pick and place robotic options and dozens of different end-effectors, making it much simpler to engineer a bespoke solution to improve product quality, reduce waste and boost throughput.

Working as a FANUC strategic partner, Pacepacker offer ‘new generation’ robots, including the M410-iC/185 palletiser. Reported to be the strongest, fastest and most compact palletiser in its class, it is suitable for restricted areas where headspace is at a premium. The new generation system has been designed with 20% less parts, making it lighter and more portable. Featuring a 185kg payload and average speed of 1700 cycles per hour, it is versatile enough for palletising bags of sugar or shifting slabs of concrete, making it popular with agricultural, food, bulk solids and aggregate manufacturers.

The ability to withstand harsh environments is equally important. Earsham Gravel tasked Pacepacker with creating a portable yet heavy-duty turnkey line, incorporating weighing, bagging and robot palletising technology that could be moved between quarries. The entire line was built into two interconnecting containers measuring 40 x 8 x 8ft. As well as meeting space constraints, the kit was designed to withstand the abrasive and wet quarry environment. Virtually doubling the daily bagging capacity to 140t, it takes just 30 minutes to load the kit onto a lorry and transport to a new location.