FIFTY YEARS after the release of the children's film, Willy Wonka and the Chocolate Factory, Siemens reflects on the starring role given to its System 4004 supercomputer. 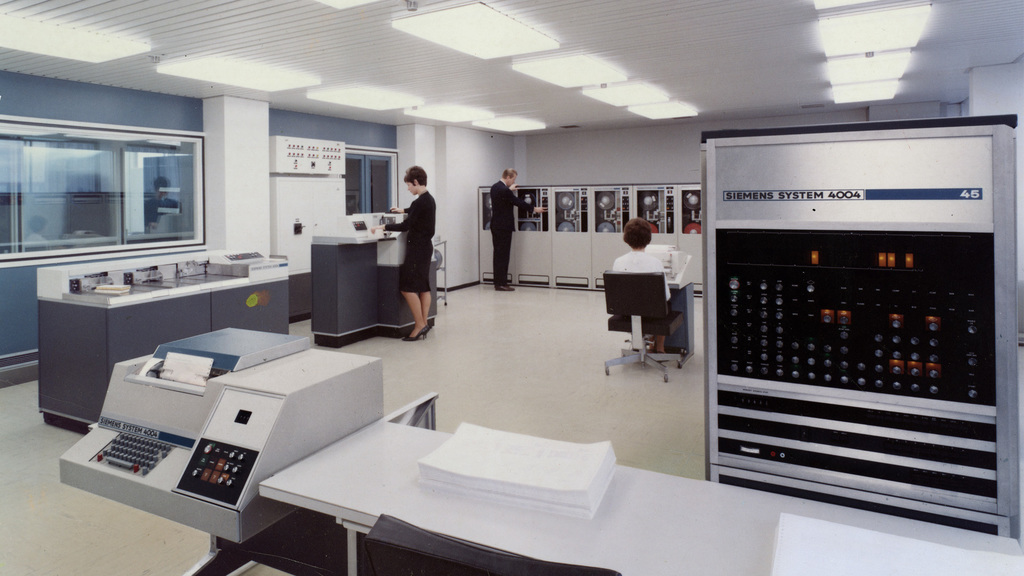 The 1971 film Willy Wonka & the Chocolate Factory (based on the Roald Dahl story Charlie and the Chocolate Factory) told the story of the titular chocolatier, played by Gene Wilder, and the worldwide race to find the five Golden Tickets that would allow their bearers admission to his magical and mysterious chocolate factory.

Before protagonist Charlie Bucket finds the ticket that would open the doors to the famous confectionery manufacturing plant – where production of an array of sweets and treats was entirely automated, save for the minor interventions of the Oompa-Loompas – we see many scenes of an international frenzy for tickets.

In one scene a rotund merchant of bagged peanuts buys thousands of boxes of Wonka chocolate, contracting the workers on his shop floor to open case after case to find a golden ticket for his beloved, and spoilt, daughter Veruca Salt. In another scene, an over-confident computer engineer, played by Tim Brooke-Taylor (who sadly died of complications from Covid-19 in 2020), fails to demonstrate “the greatest miracle of the machine age” by using a supercomputer to reveal the locations of the final golden tickets. 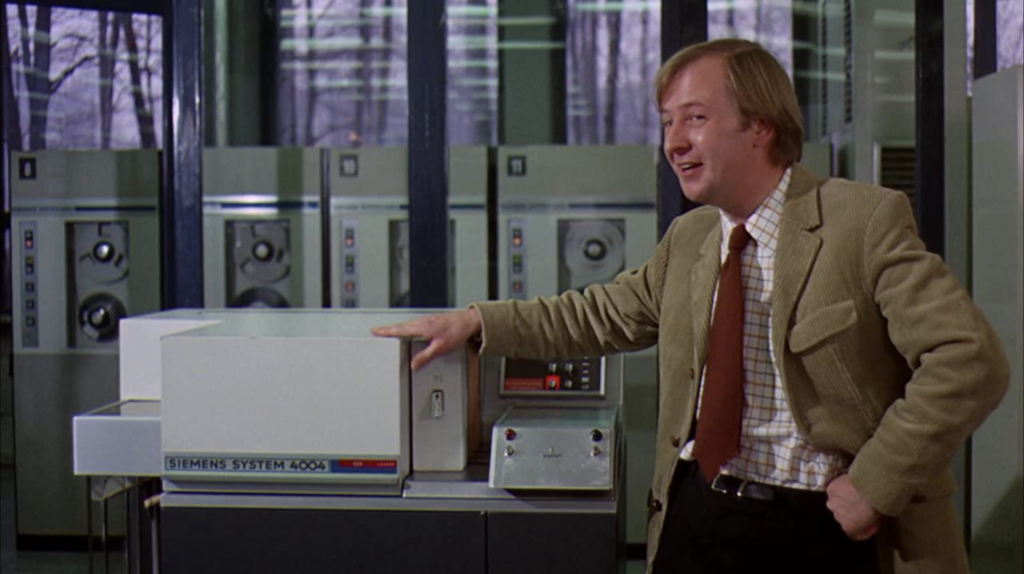 The fictional computer, which refuses the engineer’s request to find the golden tickets because “that would be cheating”, was actually based on a Siemens System 4004, a real system commonly deployed in industrial settings for its data processing capabilities.

And while the real-life Siemens computer didn’t have the processing to uncover the whereabouts of the last Wonka bars, the scene hinted at the aspirations for data analysis, AI and machine learning technology.

Fast forward to 2021 and automation, intelligent processes and almost endless storage space in the cloud have laid the foundations for data collection and analysis capable of birthing breakthroughs, generating insights and paving the way for successful new strategies to take shape across the wider food and beverage industry.

Today’s factories are becoming huge data centres with great potential for collecting valuable insights on any area of factory operations, from production through-puts to machine usage, availability, and set-up. Industry 4.0 has paved the way for smart data-driven production plants.

However, despite the massive potential of the wealth of facts and figures now available to food and beverage manufacturers, Keith Thornhill, head of food and beverage for Siemens UK and Ireland, believes the sector hasn’t laid firm enough foundations to unlock the opportunities.

Recent research by Siemens in the UK and Ireland found that 81% of food and beverage manufacturers are exploring more ways of capturing, managing and analysing production line data. But despite high uptake and good intentions, just 38% of manufacturers agreed that they had ‘somewhat’ achieved data maturity.

“Without the data to help measure operations, it is often difficult – or impossible – to know where further investment is needed,” Thornhill explained. “Until manufacturers have an accurate real-time view of production, they have no benchmark of production efficiency and therefore a limited idea of the performance benefits and scale of improvement that can be gained. Expertise is needed to help turn data into actionable intelligence.”

According to Thornhill, the baked goods and confectionery sector is a great example of where connected, real-time data can really help to transform manufacturing.

“As is the case with most short shelf-life foods, producing baked goods at volume is a mixture of controlled process and complex science, with many variables having an impact on performance. Tracking and analysing production data is a big step forward in reducing waste and improving efficiency,” he said. “Conditions need to be controlled to optimise quality and throughput. And parameters, such as humidity and heat, as well as supply chain variability, need to be monitored as part of root cause analysis. Uncontrolled variability is normally the reason why production lines stop unintentionally.

“By tracking the necessary processes through technology and connecting these data sources to central dashboards for visualisation, manufacturers can spot exactly where their faults and inefficiencies lie and act quickly to prevent failures or improve operations.”

But it is not just reducing downtime that can save costs.

“One of my bakery customers estimated that it could save over £1m a year by improving the control of its chilling process to reduce energy and potentially increase capacity,” Thornhill added. “The key to discovering this process improvement was process simulation and of course, data.”

Streamlining where possible is the answer. Working out where seconds can be shaved off production schedules or where energy usage can be reduced is vital for manufacturers that need to produce perishable products quickly.

One example where a technological intervention boosted efficiency and cut costs was a project for Kinnerton, a major UK confectionery manufacturer.

The project, at Kinnerton’s factory in Norfolk, succeeded in boosting productivity on one line by 15%, meaning that the technology quickly led to increased output and sales.

AI: use cases in the sector

So what can you do once you’ve got to grips with all that data?

Aside from using data to pinpoint manufacturing inefficiencies to save costs and improve productivity, there are some trailblazing examples of food and drink manufacturers capitalising on the opportunities it presents.

Bakery associations and manufacturers are using AI to create the perfect bread roll by feeding algorithms objective criteria such as the quality of flour, water and yeast, as well as practical experience in the production process and theoretical knowledge. In addition, the results of human testers who judge bread based on subjective characteristics such as look, crispness, taste or smell are also incorporated.

Another great example of AI is predictive maintenance technology which notifies factory floor workers of inefficiencies or production faults before they happen to prevent costly stoppages or production snags.

Meanwhile in the drink sector, the IntelligentX Brewing Co. from London is brewing a craft beer created with AI help. A chatbot automatically asks the consumer questions, the artificial intelligence collects the feedback and interprets the answers, which then flow into the brewing process.

The steps to AI

So, what do the Willy Wonkas of today and tomorrow need to do to take their first steps to unlocking the massive potential of data and AI?

Saad Waqar, business development manager for digitalisation in Siemens UK and Ireland, says the key to achieving these strategic goals is to take a holistic approach to digitalisation, connecting real-time data from across the factory floor and presenting it accessibly, so that progress can be measured and managed.

“Where AI is used successfully in an industry, there has been an evolution, a progression,” he said. “You need a strategic mindset to work towards that. That means starting from the right place with the right answers to the right questions.”

The starting point, according to Waqar, is data collection, pulling vital information from across a plant.

The next step is the platform and deciding whether data is needed for real-time visualisation or for long-term analytics, as well as where it needs to be stored.

The third stage is analytics, which Waqar admits can be the biggest barrier to progress.

“It’s here you try and make sense of it all,” he explains. “For every data point to capture you will be missing others. So, in order to make sense of what you already have, you will have to keep going back to collect more data. This is the stage that requires the most patience.”

The next stage is the algorithm - the building blocks of AI.

The final stage is the optimisation and feeding the AI engine with more data.

“The more data, the better the AI,” Waqar said. “You need a lot of data to make decisions. This is where Industrial Edge computing helps. It collects and analyses data at the machine level to provide live status and diagnostic information about a machine’s underlying systems. It allows you to change the data and run again. It’s a loop and you must feed the process to continually optimise.”

The UK food and beverage sector has so far only touched the tip of the iceberg when it comes to data analytics and AI, according to Keith Thornhill.

“50 years ago, Willy Wonka’s chocolate factory was pure imagination,” he said. “Today, that level of automation and digitalisation is within reach of manufacturers, regardless of size. But the industry must adopt these changes soon. Thinking longer-term is important, and this is where smart investments through smart finance can support businesses that are keen to invest in modernisation, but don’t have the cash flow to pay for it all up front.

“Recent research from our Financial Services business showed that the window of opportunity to gain competitive advantages through digitalisation investments is narrowing, with a ‘tipping point’ of around five years, after which manufacturers will be playing catch-up.”

FOOTNOTE: Truth is often stranger than fiction. When originally released, in 1971, Willy Wonka and the Chocolate Factory was a production of Wolper Pictures and real life food production company, The Quaker Oats Company. Quaker Oats had bought the toy company Fisher-Price in 1969. By investing in the movie, Quaker earned for Fisher-Price the intellectual property rights to make toys based on the film; and the rights for its foods arm to make confectionery products named after Wonka's fantastical creations. The film, which was a flop on its original release, was bought by Warner Bros. for $500,000 in 1977. It was Warner's marketing clout – and the release of the film onto retail VHS tape in the 1980s – that earned the film its fanatical following.