The ‘ballroom’ concept is the much trumpeted vision of the pharmaceutical ‘factory of the future’ but does this development create new safety risks for employees? Hugh Freer looks at some of the issues 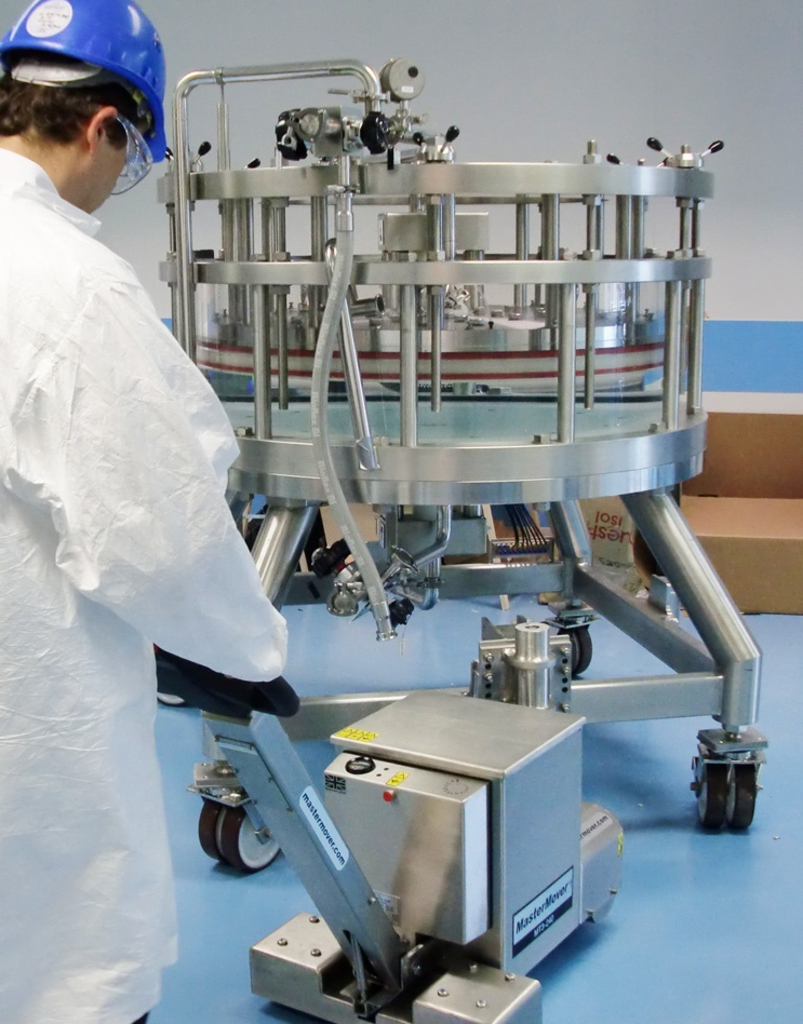 WHEN COMBINED with single use technologies it’s easy to see the attraction of ‘ballroom’ production facilities. Flexibility, fast changeovers, reduced CAPEX costs and increased output are just a few of the reasons the concept has taken hold with many of the industry’s big players. But central to the ballroom idea is the need for process equipment to be mobile. This fundamental change brings with it increased risk as production staff are forced to resort to muscle power alone when moving process equipment around the ‘ballroom’.

The modern production facility of today contains a wealth of wheeled equipment with weights often exceeding four figures. A typical 300L reactor will tip the scales at over 800kg and a 1000L mixer will very likely weigh more than 1300kg. With weights like these, neither would be suitable for manual handling, regardless of whether the equipment manufacturer has included handles.

So, what’s the solution? Well, contrary to what many might think, it isn’t a pallet jack. While every facility has got them lying around, they’re designed to move pallets. If you use a pallet jack to lift a tank off the floor, you’ve immediately raised its centre of gravity. At the same time, you’ve lost the stability offered by the tanks’ caster wheels. A far safer option is to keep the tank on the ground and use a mechanical aid that’s purpose built for pulling and pushing heavy wheeled loads. That’s where the pedestrian electric tug comes in.

Available in various capacities and configurations, an electric tug is an external drive system that can be hitched to any piece of mobile process equipment. Its function is to eliminate the manual push and pull from moving things like tanks or chromatography columns. At the same time, a pedestrian tug delivers a level of control and precision manoeuvring capability that simply can’t be achieved when moving heavy loads by hand.

The ballroom concept: 3 things to consider

If you’re buying new equipment then it’s a great opportunity to ensure compatibility with a tug at the drawing stage. While modifying existing process equipment is simple enough, there can be no doubt that it’s easier and cheaper to ensure that new equipment is tow tug compatible at the specification stage.

2. Not all tugs are equal

The last thing you want when buying an electric tug is a machine that doesn’t have the power or the necessary grip to move the load. There’s plenty of ‘optimistic’ tug marketing out there for products that claim to move heavy weights with ease. An easy way to separate the good from the bad is to look for tug manufacturers who readily provide photo and video evidence of their machines moving the kind of things that you want to move in environments that look like yours. You can also ask them to cut the sales pitch and provide an engineering explanation as to exactly how the machine will achieve the required power and grip to move your load.

Not everything in the ballroom needs a mechanical aid. Swapping out caster wheels for high grade equivalents that reduce friction can make a huge difference ergonomically. As always, you get what you pay for. Typically, higher grade casters will be more expensive but you’re paying for quality tyre materials that will reduce friction and prolong the life of the product. At the same time, you’ll be getting bearings both in the wheel and top plate that are designed specifically to minimise resistance. These simple tweaks carry cost but bring with them benefits, both in terms of ergonomics and product life.

Pedestrian electric tugs that are purpose built for cleanroom use offer the perfect solution to ensure speed and flexibility of production while ensuring safety for staff.