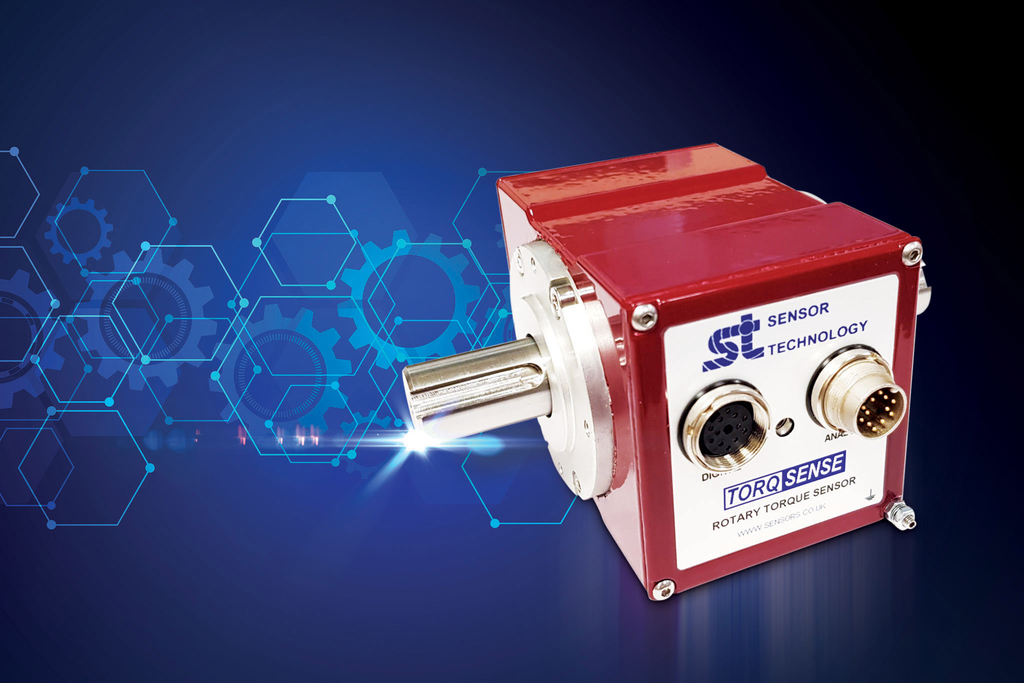 Designated the TorqSense SGR510/520 series, the new units have a 250% overrange reading capacity, allowing sudden spikes in torque to be measured and recorded accurately. The design also compensates for any extraneous forces, such as bending moments, inadvertently applied to the sensor, improves sensitivity and has a wide temperature tolerance.

The bridge is essentially four strain gauges glued onto the shaft that is to be monitored in a square formation set at 45deg to the axis of rotation. Thus, when torque is applied to the shaft two gauges are stretched into tension and two go into compression.

A rotor mounted ultra-miniature microcontroller, powered by an inductive coil, measures the differential values in each strain gauge and transmits them back to the stator digitally, via the same coil. The SGR510/520 series transducers then use state of the art strain gauge signal conditioning techniques to provide a high bandwidth, low cost torque measuring solution with high overrange and overload capabilities.

“This design gives the TorqSense SGR510/520 several significant advantages over conventional torque sensors,” says Mark Ingham of Sensor Technology. “Firstly, it eliminates the sort of noise pickup and signal corruption associated with slip ring and other analogue methods of transferring torque data from rotor to stator.”

Ingham explains that external noise pickup into the wiring is virtually eliminated due to the short distance between the strain gauge elements and the rotor’s measuring circuits. Further, multipoint calibration reduces any linearity errors within the sensor.

He goes on to say that the large functional overrange capability allows the peaks of a torque signal to be captured faithfully without any clipping when operating the sensor close to its full-scale rating. This, combined with a mechanical overload capability of over 400%, make the SGR510/520 series torque sensor a very robust torque measuring solution.

The measuring range of the SGR series is 1Nm to 500Nm (with models up to 13000Nm available shortly), accurate to +/-0.1% and  with a  resolution to +/-0.01% of the transducer’s full scale The digital transmission between rotor and stator  cuts out all cyclic fluctuation of the signal due to shaft rotation and generates a digital sample rate of 4000 samples per second.

“For ease of use there is a built-in test function,” says Ingham, who summarises the new  TorqSense SGR510/520 with: “Most torque sensors require the use of slip rings to transfer torque readings from the rotating shaft to the static readout. These are noisy in use, slow and fiddly to set up and, as wearing parts, are not always reliable.

“Our TorqSense ranges operate without slip rings, using non-contact signal transfer instead, so these problems are designed out at a fundamental level. The new SGR510/520 series will be suitable for torque measuring, testing, feedback control of drive mechanisms and process control applications.