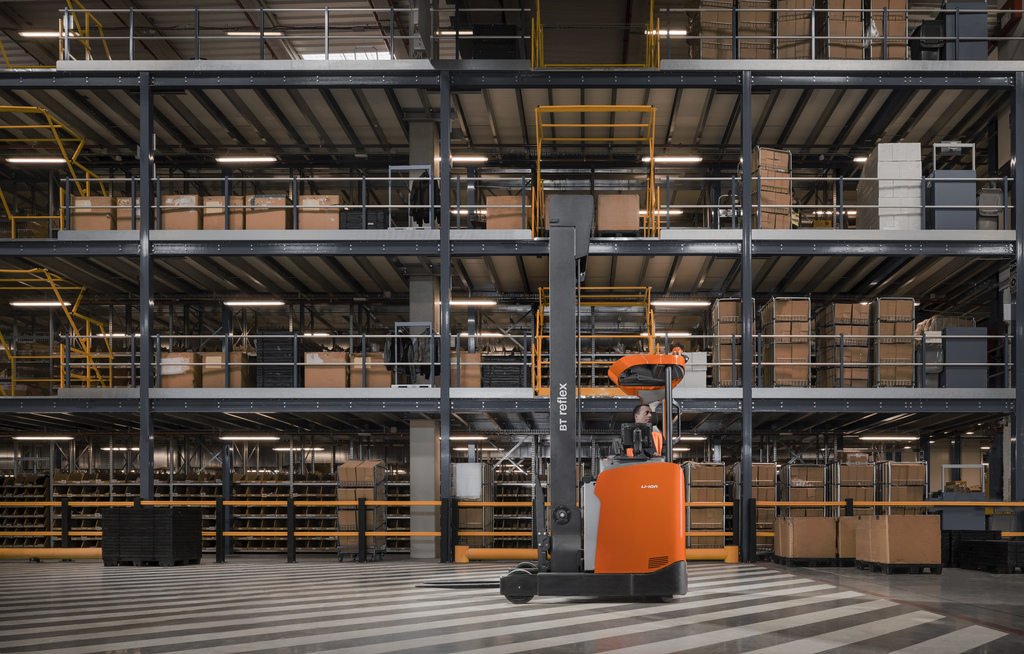 ACCORDING TO most reliable estimates, the forklift market has historically been split roughly 60-40 between LPG- or diesel-powered internal combustion engine (IC) trucks and battery driven electric models – with diesel being the most dominant fuel. But the coming years are anticipated to bring a clear shift away from diesel and LPG towards electric forklifts.

At Toyota Material Handling, for example, we expect the UK market for electric counterbalanced forklift trucks to grow by as much as 10% in the next five years as more and more truck users opt for electric power over IC-engine driven machines when the time comes to replace or upgrade their fleets.

The rise of the electric lift truck can be attributed to many different factors – including heightened environmental concerns, rising fuel prices and greater awareness of staff welfare.

Advances in battery technology are also leading to greater interest in electric power, while the wide-ranging changes to intralogistics processes brought about by the seemingly relentless increase in internet shopping tend to favour electric trucks too.

Of course, environmental issues have been on the corporate agenda for many years but recent talk of the introduction of a carbon emissions tax has seen a sharp increase in the truck users that include like-for-like carbon emissions comparisons as part of their forklift fleet purchasing process. IC-engine trucks rarely come top of the class in such tests, which will not be a surprise to many, given that electric forklifts have always been perceived to have the edge over the IC-engine alternative when it comes to all matters “green”.

But it would be wrong to conclude that the electric truck market is only growing because LPG and diesel sales are in decline: recent developments in technology mean the electric lift truck is now a highly sophisticated product that offers real business benefits to the broadest range of users. And, furthermore, today’s battery-driven forklifts are capable of performing highly effectively within the type of harsh environments for which, historically, only diesel trucks would be considered suitable.

Perhaps the single biggest technological advance behind the upsurge in electric truck sales is the arrival of the lithium-ion battery. While lead acid remains by far the dominant battery type within the electric-powered forklift market, sales of lithium-ion forklifts have been on a sustained upward curve for some time.

Although it is estimated that in the region of 90% of all electric forklifts in operation throughout the world are still running on lead acid batteries, the lithium-ion solution has become established as a viable alternative. Indeed, nearly a quarter of all Toyota electric powered forklift trucks ordered for delivery in the UK now feature lithium-ion battery (LiB) technology.

LiB-powered forklifts offer several benefits. For example, a truck’s overall availability is significantly increased thanks to a LiB’s ability to give in the region of four to five hours of operating time after just a single hour’s charging.

Also, these batteries allow for opportunity charging which makes it possible for trucks to be recharged anywhere by the operator during breaks in a shift or other periods of downtime. Having the opportunity to quickly and easily charge batteries means there is no need to swap batteries ¬– so dedicated charging rooms and spare batteries aren’t necessary.

LiB technology is most beneficial at sites where trucks are working at high intensity over multiple shifts or extended periods. Essentially, a company that runs one reach truck 24 hours a day has plenty to gain from switching to LiB, while it is likely to make more financial sense to stick with lead acid if your facility operates a dozen machines for light duties from nine to five.

In fact, with lithium-ion offering so many benefits that are revolutionising the way some companies operate their intralogistics processes, it is easy to forget that, for many users, the traditional lead acid battery – which has been a highly capable forklift power solution for many years – will still represent the best option.

Our pride in the Toyota brand means that we will always provide the right power solution for every electric truck application. It doesn’t matter if it’s lithium-ion or lead acid – so long as it is right for the customer.

So, if you are considering switching to lithium-ion, make sure your MHE supplier really understands your business and undertakes a thorough survey of your handling operation as well as – most importantly  – the infrastructure of your site.

At any multi-shift operation with a high number of trucks working it is essential to manage and schedule operator break periods and consider the scenario where several LiB trucks are plugged in for recharging at the same time.

This is because during the shorter “opportunity” recharging process a LiB can draw down up to four times the power from the National Grid than what is needed to charge a traditional lead-acid battery over 8-12 hours.

If charging schedules are not properly managed and too many LiBs are on charge at the same time, there is risk that a building’s power supply could be overloaded.

At Toyota we advise any customers that are considering switching to lithium-ion to speak to their utilities provider to flag up any potential power supply issues from the outset. But good charging discipline will deliver the consistent power levels required to allow the trucks to work around the clock – even within the most demanding environments.

Bespoke simulation software enables us to consider all aspects of a client’s operation from the outset and model the optimum choice of battery, and battery charging regime, for any facility. From there we can advise on power requirements and help customers considering switching to LiB to look at the bigger picture when assessing LiB’s suitability for an application.

Hydrogen fuel cells are also emerging as another viable alternative to lead acid batteries. At the present time, Hydrogen only becomes financially viable in a scenario when 90 or more trucks are in operation at one location because of the significant investment required in hydrogen generation and storage systems. So, for now at least, the potential user market is somewhat limited.

But large fleet operators are keen to embrace the technology and Toyota Hydrogen fuel cell-powered forklifts are already operating at sites across Europe (particularly the Nordic region) as well as in Australia. Meanwhile, in the automotive sector, Toyota’s hydrogen-powered Mirai is at the forefront of a new age of hydrogen fuel cell cars that deliver long distance zero-emissions driving.

Of course, as with any new development, when the product matures the price will drop and there is every reason to believe hydrogen fuel cell power will be within reach of every business with a forklift fleet in the not-too-distant future.

However, while the world rushes to eliminate – or at least minimise – the use of fossil fuels and the myriad benefits that electric trucks offer users in terms of running costs, productivity, reduced pollution, and so on, it Is unlikely that we are witnessing the last days of the LPG- or diesel-powered lift truck.

There are currently still numerous applications, particularly where extra-heavy lifting is involved and truck capacities of eight tonnes and over are required, where a forklift with an IC engine remains the best option. However, this might not be the case in 10 years’ time.