Terex Corporations Leicestershire plant is the Centre of Excellence for Crushing Technology for its Materials Processing business. It is focused on reducing the risk of accidents and injuries to its employees and has invested in two electric-operated tugs for moving 16t crusher machines through the production process 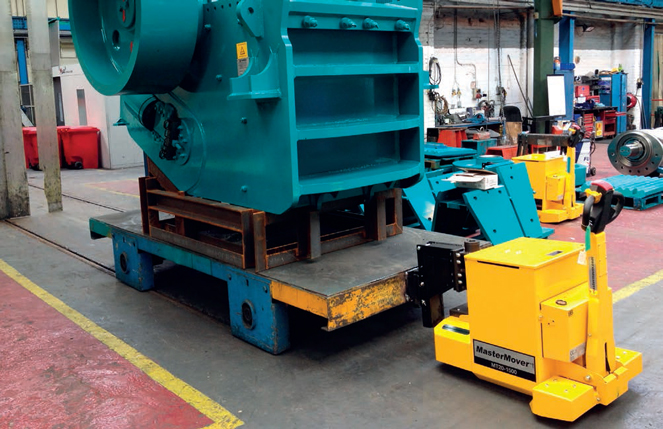 Terex Corporation's Leicestershire plant is the Centre of Excellence for Crushing Technology for its Materials Processing business. It is focused on reducing the risk of accidents and injuries to its employees and has invested in two electric-operated tugs for moving 16t crusher machines through the production process

Terex Corporation, based in the US is a diversified global manufacturer of a broad range of equipment operating in five business segments. At its Coalville plant Terex manufactures heavy material processing equipment, including mobile and static crushing, screening, washing and recycling equipment.

The Coalville plant employs about 80 people and produces a wide range of crushing machines, which can vary in weight from 10 tonnes up to 38 tonnes. These machines are primarily used by customers in the aggregates, minerals, mining, quarrying, recycling and demolition sectors.

The crushers are moved through various stages of production by using bogies on rail tracks fixed to the factory floor. Due to the weight of the crushers, manoeuvring the bogies can be quite a challenge.

Simon Croker, general manager at Terex, says: "Prior to investing in MasterMover's MasterTug MT20 machines, we were having to push and pull the bogies along the tracks using forklift trucks. We wanted to look at another viable option.

Terex searched for a suitable alternative on the Internet and came across MasterMover's website. The MasterTug MT20-1500 was identified as a suitable machine for moving the bogies. The MasterTug can pull, push and steer wheeled loads from 50kg up to 25,000kg. Traction is key to moving heavy loads and so the MasterTug is designed to get all the traction it needs by using a coupling system to transfer load weight to the drive wheel.

Terex purchased two MT20s in June 2012 and has been using these machines primarily in the paint and shot blasting bays, where they push and pull the bogies in and out of the spray booths.

As well as supplying the two MT20 tugs, MasterMover also manufactured five different quick-release couplings for Terex, to enable the MT20s to attach easily and quickly to each of the five types of bogie at the plant.

"The benefits of using the MasterTug MT20 machines are their ease of use. It's also a very compact machine, which means it is easy to move bogies in and out of tight spaces or around corners.

"The feedback from the production staff has been overwhelmingly positive. The initial training provided by MasterMover was excellent and so the buy-in from the workforce was very high," explains Simon Croker.
MORE FROM THIS COMPANY