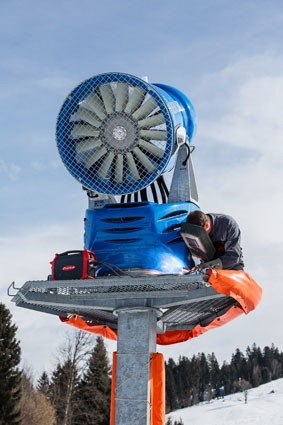 Among the first users to harness the power of this new technology is Bergbahn AG Kitzbühel, which has been deploying the portable MMA welding system to great success for assembly and repair works on virtually impassable terrain. Thanks to the particularly powerful lithium ion battery and the long welding time it allows, such work can be completed significantly quicker and with less manpower than ever before – and all without any connection to the grid.

Ensuring that the Streif ski resort loses none of its charm is the responsibility of Bergbahn AG Kitzbühel. Its 500 staff make sure that the 54 cable cars and lifts – from simple drag lifts to modern ten-seater cable cars – run smoothly and keep the 170 km of prepared descents in perfect condition.

Nearly one thousand snowmakers guarantee the desired snow cover over resort, which ranges over heights of 800  to 2000m. In addition to all this, the infrastructure continues to be modernised and expanded. In 2015 alone the company intends to invest in a new eight-seater lift, roughly 210 extra snow cannons and snow lances, as well as an additional reservoir.

When it comes to maintaining this infrastructure, together with the fleet of 32 snow groomers and other vehicles, Bergbahn AG undertakes most of the work itself. To do so the company has four workshops and eight certified welders on its books. In summer they mainly work on repairing the utility shafts supplying power and water to the snowmakers. The shaft cover hinges are often damaged during the winter by the snow groomer drivers, who cannot see them while preparing the pistes due to the snow cover.

Roughly 700 of these shafts are distributed across the pistes surrounding Kitzbühel, some of which are on terrain impossible to reach by car. As the power supply to the snowmaking systems is switched off during summer for safety and cost reasons, in the past carrying out any repairs meant a large-scale operation: in addition to whichever equipment was needed to perform the repair itself, a 200kg 6kV generator also had to be supplied. As a result up to four people were needed to load it onto a car, bring it the relevant shaft, and then take it away again once the work was complete.

Since May 2014 Bergbahn AG has been able to forego the small army needed for such types of work, when the company took delivery of the first battery-powered MMA welding system from Fronius: AccuPocket. Designed especially for mobile applications, this solution boasts a high powered battery and has wasted no time in convincing the powers that be of its worth, as Uli Aufschnaiter, operations manager at Bergbahn AG, confirms: "After conducting our first tests we quickly made the decision to buy based on the undoubted benefits.

Saving time on every job

As a battery-powered solution, AccuPocket's greatest strength is of course its mobility. Thanks to AccuPocket, the cumbersome - but necessary - generator and power cable of the past can now be left back at the shed. "Now when I'm preparing to go out on a job, all I need are the working materials and the transport case containing a fully charged AccuPocket. I just load them in the car and I'm away,” says Bergbahn welder Daniel Seyer, who heads out to the resort with AccuPocket on an almost daily basis. "Once I arrive at the worksite, all I need to do is take the unit out of the case - which also houses my welding gloves, the chipping hammer and the necessary system components - and walk the last few metres to the job.”

As the extremely robust welding system - including battery - weighs just 11kg, the engineer can also carry his other equipment at the same time, saving the need to wander back and forth between the car and the job. "Thanks to the compact nature of AccuPocket, not to mention the lack of any power cables, I'm able to save at least 30 minutes on every job.”

Based on his own experience, Daniel Seyer has found that the approximately 400 Wh charging capacity of the built-in battery lasts for a maximum of eighteen 2.5mm electrodes or eight 3.25mm electrodes.

For larger scale welding tasks, the AccuPocket can also be hooked up to a generator and operated in hybrid mode. However, just a compact (weighing just 21kg) 2kVA generator is needed, as the welding process is supported through power from the battery.

A complete charging cycle using the AccuPocket's own AccuCharger (supplied with the system) lasts just half an hour. "In reality, this means that our welders can connect their units to the charging station overnight or during lunch and count on having a full battery charge available for welding when they return,” reports Uli Aufschnaiter.