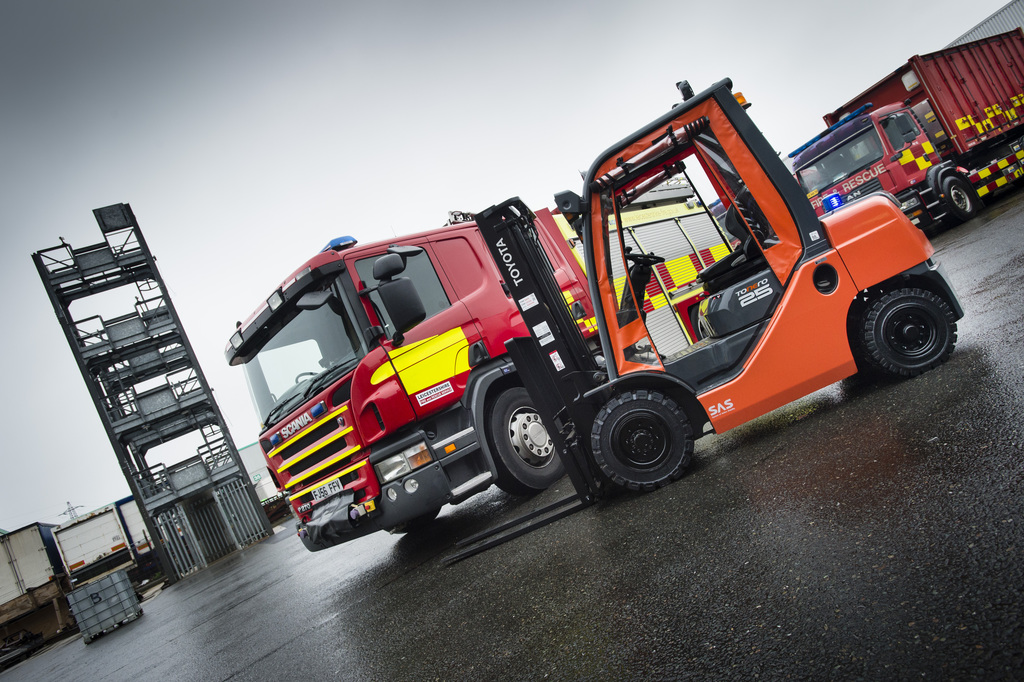 The Tonero forklift truck will be used to aid Firefighter training at the Southern Fire and Rescue Station, Leicester. Its duties will include include moving vehicles and heavy apparatus used in training within the station yard.

The donation came about following a conversation between Mark Johnson, a firefighter at the Station and Chris Pole, Toyota’s National Parts Manager, who is based at the adjacent Toyota Business Centre in Meridian Business Park.

Chris Pole explains: “Mark and I are good friends and in passing conversation it was clear that Toyota manufacture and supply forklift trucks which are much safer, efficient and overall far better suited to the needs of the Station than its previous truck.

“Having said that I’d look into the possibility of making a donation, I referred the idea to our commercial director, Jon Buckley, who was in full support and approved a highly specified Tonero truck for donation.”

Jon Buckley added: “While Toyota Material Handling is a UK-wide business, being an active part of our local communities is at the very heart of our values. The donation of the Toyota Tonero forklift truck is a gesture of thanks to the station for the fine service they provide the community local to our business centre here in Leicester and further afield.”

The Toyota Tonero is a range of engine powered counterbalance trucks which offer reliability, safety and productivity during light to heavy-duty applications.

Ian Holden said: “I would like to thank Toyota Material Handling for their kind donation of the forklift truck. The new forklift truck will be particularly beneficial at our Southern Fire Station, where we have our new Urban Search and Rescue (USAR) rig. The USAR team need to maintain their skills through regular training, as they could be deployed to any major incident within the UK, such as a collapsed building. The forklift truck will certainly make a difference to the team and for Firefighter training in general.”

Paul Purser added: “Thank you to Toyota Material Handling for the donation of the forklift truck. This will benefit the Station and the Service in a number of ways; by allowing us to move vehicles around the yard more easily and in particular by moving the concrete blocks in place on our new Urban Search and Rescue rig.”