AS DEMAND for cleaner, low-cost air travel increases and drives innovation in aircraft design and manufacture, it is vital the UK maintains and extends its world-leading capability in sustainable aviation propulsion technologies 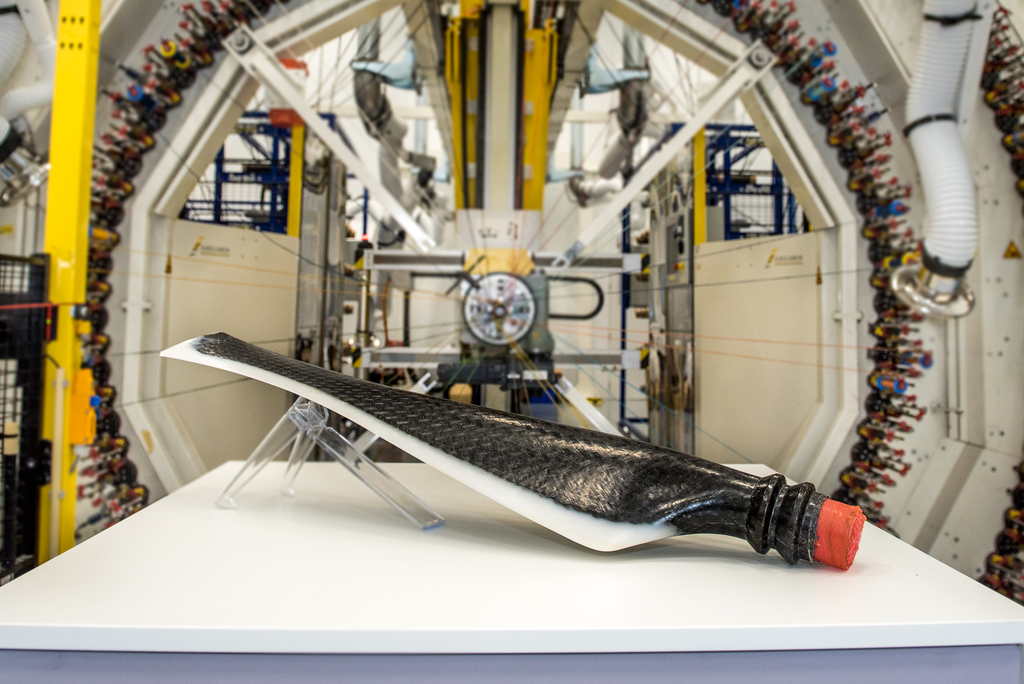 The aerospace industry predicts that the demand for turboprop aircraft will start to rise as the fuel savings are greater on this type of aircraft compared to jets.

As part of Digital Propulsion (DigiProp), the National Composites Centre (NCC) has designed and manufactured a full-scale prototype of a propeller blade and its manufacturing system for turboprop aircraft using a novel process that’s never before been attempted in this application. It has shown real potential to have a high-volume cost saving.

Dowty Propellers, part of GE Aviation, approached the NCC to join an exciting collaborative programme to design and develop composite propeller blades that not only reduce costs but improve performance. This innovative work would accelerate Dowty’s digital manufacturing capabilities, demonstrating the UK’s world-leading expertise in propulsion technology for turboprop aircraft.

In 2017, the £20 million DigiProp programme was launched to ensure UK manufacturers lead the way in propulsion technology for turboprop aircraft. It was funded jointly by industry and the Aerospace Technology Institute (ATI) Programme, a joint government-industry investment delivered through a partnership between ATI, the Department for Business, Energy and Industrial Strategy (BEIS) and Innovate UK. DigiProp was led by Dowty Propellers working in partnership with the NCC, the University of Sheffield Advanced Manufacturing Research Centre (AMRC) and the Manufacturing Technology Centre (MTC) – three of the seven centres of the High Value Manufacturing Catapult. The aim of the programme was to exploit the latest design, manufacturing and test methods to increase performance in propulsion technology while reducing costs.

Through DigiProp, the NCC has identified triaxial carbon fibre braiding technology of advanced thermoplastic composites as a low-cost, automatable, high performance and environmentally friendly manufacturing process. Thermoplastic composites can be recycled by being melted down and formed into another product, therefore reducing waste. The whole process is automatable, resulting in a reduced number of defects and less reworking required.

Thermoplastic triaxial braiding for the structural component of a large propeller blade has not been attempted before. For smaller propeller blades, the NCC discovered that it is a quicker and easier manufacturing process with very significant cost benefits.

The NCC team has developed a new manufacturing process using a combination of bladder moulding and braiding of recyclable carbon fibre composites. The bladder system involves the creation of a wax mould coated with a silicone product, which creates a mandrel for overbraiding with the comingled material.

As part of DigiProp, the NCC team reviewed the blade manufacturing workflow, exploring different technologies and processes to be able to input the blade requirements and a set of geometric constraints to create as much flexibility as possible in the design of the new blade structure.

To produce lighter weight blades at a lower production cost, the NCC team also conducted materials and process down selection. After exploring five options within the cost parameters, they used this data to conduct trials for testing the technologies and processes.

Six prototype propeller blades were developed in total, building on and enhancing design and manufacturing techniques each time.

Compared to the current process, the time saving for manufacturing blades was substantially better than previous manufacturing processes, so this would have the potential to result in a high-volume cost saving. The change in materials has reduced the consolidation stage of the process substantially.

By using thermoplastics, the NCC has found a time reduction through this cure process to around five minutes rather than the four hours typically found for a similar thermoset epoxy resin consolidation. There is a fatigue life improvement through removal of the foam core, which has also resulted in a reduction in weight. There is also improved damage tolerance when considering foreign object impact.

- Due to the complex shape of a propeller blade, multiple parameters needed to be assessed and there was no triaxial braiding baseline to compare against.
Working at a larger scale - initial testing and research had been proved on a simplified half blade; however, these processes then had to be utilised to produce a full-size blade, which has a more complex shape in comparison.

Braiding - determining the braid angle and testing the thickness, strength and performance of the material were significant challenges for the NCC team. They overcame this by utilising material characterisation and lab testing on the half blade to understand whether the final part would conform to specification.

- Material composition of the dry-fibre and the resin used to infuse the dry-fibre blade were also uncertain since the blade needed to be durable and free of surface defects. The dry fibre preform also needed to retain its form and not sag, distort or move when being layered around the mandrel. This is to ensure that the fibres are correctly positioned, therefore meeting the design intent and blade performance.

- The manufacturing process solution for the thermoplastic blade required the development of a rigid mandrel for braiding that could be easily removed from the mould but have an inflatable silicone bladder remain. This would enable the application of pressure internally to the composite preform. There was also the issue of getting a large rigid structure through a small aperture, and the solution was to use a combination of wax and silicone. A significant challenge that the NCC faced was with the thickness of the silicone. If the thickness was inaccurate, there was a risk of a failure of the bladder and incomplete consolidation of the blade.

Working on the DigiProp programme has been a unique opportunity for the NCC. The team has developed digital manufacturing technologies and manufacturing solutions for blade designs with wider applications for other hollow 3D structures. Examples include economically recyclable composite components for smaller electrical air vehicles. This has led to a further project, the Novel Composite E-Bike. For this, the NCC partnered with Bristol-based mountain bike manufacturer Starling Cycles and Composite Braiding, leaders in thermoplastic composite braiding technology.

Dowty Propellers is now beginning to use the next generation technologies realised in DigiProp for evolving aircraft applications and to target next generation platforms. Potential customers are benefiting from its ability to support customer attribute trade studies with short turnaround time on performance analysis.