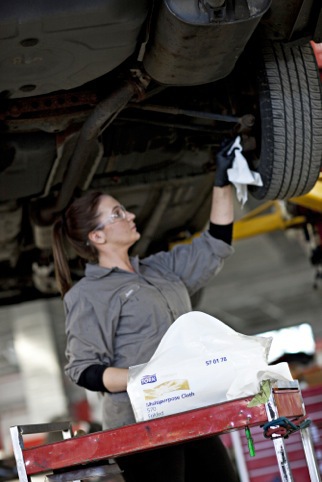 Industrial operative needs a handy supply of wipers to keep components, surfaces and hands free of grease and grime. However, if the wiper is too small, already soiled, insufficiently absorbent or too far away to be immediately useful, productivity could suffer.

Costly mistakes could also occur if a wiper that is prone to linting is used on a delicate component. And when using solvents to carry out a cleaning task, a flimsy paper product would quickly break up and become useless. This means industrial managers need to be sure their wipers come up to scratch and are fit for purpose when equipping their premises with consumables.

Linting and snagging can be a particular problem when inferior products are used to clean machinery. One of our pharmaceutical customers had an ongoing issue when using low-cost perforated wiping rolls because these had a tendency to snag on machine parts.

The company switched to individual sheets of Tork Heavy-Duty Cleaning Cloth, a low-linting non-woven product. The switch boosted the company’s productivity because the cleaning operation became much more efficient and no reworking was required.

Some companies choose rags over disposables in order to cut their wiping costs – but many rags do not come up to scratch and can actually cost the company money.

For example, one of our sales team came across a railway repair centre where rags were used because they were considered to be a  'cheap' option. However, the company soon came to realise that around a third of the rags were unusable - either because they were too small, non-absorbent or contained sharps.

In some cases it is not the wipers themselves, but the dispensing system – or lack of it - that can cause problems. In large factories in particular it is often the case that wipers can never be found when they are needed.

We came across a manufacturer of drills used on North Sea Oil platforms where operatives were having to walk a quarter of a mile to pick up each wiper from a centrally-placed floorstand. By suggesting that smaller units of wipers be positioned in bays and cubicles around the factory wherever they were required we helped to improve the factory’s productivity.

In premises where operatives are working in bays, the W4 Tork Performance dispenser is a good solution since this can house a wide range of cleaning cloths either for general industrial use or for specialist applications. These include Tork Industrial Heavy-Duty Cleaning Cloth; Tork Low-Lint Cleaning Cloth and Tork Preparation Cleaning Cloth.

It often makes sense to equip a premises with more than one type of wiper to cope with the various tasks that are likely to arise. An industrial operative may need wipers for hand-cleaning, mopping up spills, wiping delicate screens and polishing paintwork, for example.

Tork Reflex Wiping Paper Plus works well for hand-wiping and for mopping up spills. The system gives out only one sheet of paper at a time to avoid over-consumption and it is available in both a full-size and mini wall-mounted dispenser as well as in a portable format.

When cleaning with solvents a more heavy-duty product will be required. Tork Industrial Heavy-Duty Cleaning Cloth, for example, has been engineered to soak up solvents efficiently and release them effectively back on to the wiping surface. A general-purpose paper wiper would simply absorb the solvent and cause the paper to disintegrate, wasting both the wiper and the solvent.

Short-cuts and perceived 'economies' in the industrial environment can be surprisingly costly. It therefore makes sense to ensure that every wiper is fit for purpose, designed for the job in hand and generally 'up to scratch'.