Industrial wiping has evolved considerably over the past 50 years or so. Daily contact with grease and grime is gradually being replaced with increased automation, while a growing concern for health and safety has led to a more widespread use of disposables. SCAs Amelia Baker looks at the changing face of industrial wiping 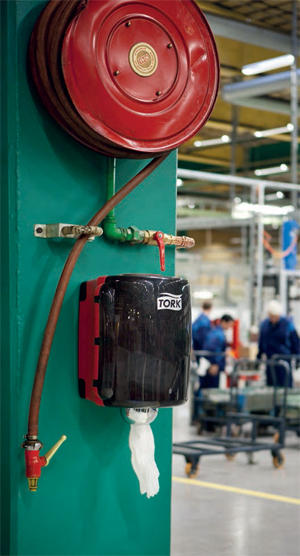 Industrial wiping has evolved considerably over the past 50 years or so. Daily contact with grease and grime is gradually being replaced with increased automation, while a growing concern for health and safety has led to a more widespread use of disposables. SCA's Amelia Baker looks at the changing face of industrial wiping

Industry has changed dramatically over the past half century - and industrial cleaning has changed with it. Rags are no longer considered to be the answer for many industrial cleaning processes, and disposable wipers have become an increasingly popular alternative. So why has this occurred? Rags were the standard industrial wiper in the 1950s and 1960s when textiles in general were the traditional choice, both at work and at home. Babies were clothed in terry towelling nappies; dishcloths were widely used in kitchens and everyone carried a cotton handkerchief in their pocket.

The 'make do and mend' ethos of the post-war years made it natural to turn old clothes into rags, and the cotton clothing that was widely available at the time was ideal for use as strong, absorbent cloths.

However during the 1970s, an increasing number of synthetic materials began to be used for clothing - and rags made from nylon and polyester were found to be much less absorbent than their cotton counterparts. At the same time a growing awareness of health and hygiene put rags under new scrutiny.

People were becoming concerned about the health implications of leaving solventsoaked rags lying around the workplace, for example. Some solvents commonly used for industrial cleaning also began to be linked with conditions such as dermatitis and respiratory diseases.

Against this background came the first disposable wipers. Made from paper and dispensed from a long roll, these were convenient because the roll could be carried around and a clean length of paper could be torn off when needed. However, paper wipers were no match for textiles in terms of strength. And the loose wiping roll left on worktops and benches was also vulnerable to contaminants in the atmosphere such as oil, grease and grime.

So disposable manufacturers began working on producing non-woven products that were stronger than paper wipers and could be used for tough applications. They also began coming up with dispensing systems - such as SCA's Tork Performance range - which would keep the wipers clean and protected before use.

While health and safety plus the development of increasingly strong and absorbent wipers were helping to change the face of industrial cleaning, industry itself was changing. A growing reliance on automation meant that fewer people were dirtying their hands or work surfaces, and 'dirty' industries were coming under increasing pressure to clean up their acts.

Automotive workshops began to offer customer-viewing areas where staff were expected to show a clean and professional environment. At the same time an increasing number of industries began demanding specialist wipers for the cleaning of sensitive electronic equipment.

The emergence of systems such as Best Practice meant that industrial managers began to prefer to use clean disposable wipers in smart, functional dispensers such as the Tork Performance range, since these create a better impression than a collection of soiled rags lying around the workplace.

One important factor determining the choice of wipers over the years has been that of price. Industrial buyers are constantly seeking the lowest-cost wiper for the task in hand.

However, it is not the simple question of price that is driving the wiper market today, but the more complex issue of cost in use.

Wipers have to provide the best quality at the best price, and they also have to be suitable for the task in hand. For instance, processcritical applications such as cleaning oily components or polishing surfaces need wipers that have been expressly made for this purpose. So manufacturers are increasingly coming up with specialist wipers that are highly efficient at the wiping task for which they were intended.

Over the years, industrial wipers have had an important part to play in improving health, safety, cleanliness and efficiency in factories and workshops. They have also become integral to the smooth running of a manufacturing site.

All industries change with the times, and suppliers to those industries must adapt at the same pace. Wiper manufacturers are constantly formulating products to cover an increasingly wide range of tasks and this they will continue to do - whatever the trends may be in the future.
MORE FROM THIS COMPANY