Fulton has supplied a skid-mounted horizontal boiler to American Pan UK, a supplier of industrial bakeware and pan maintenance services. 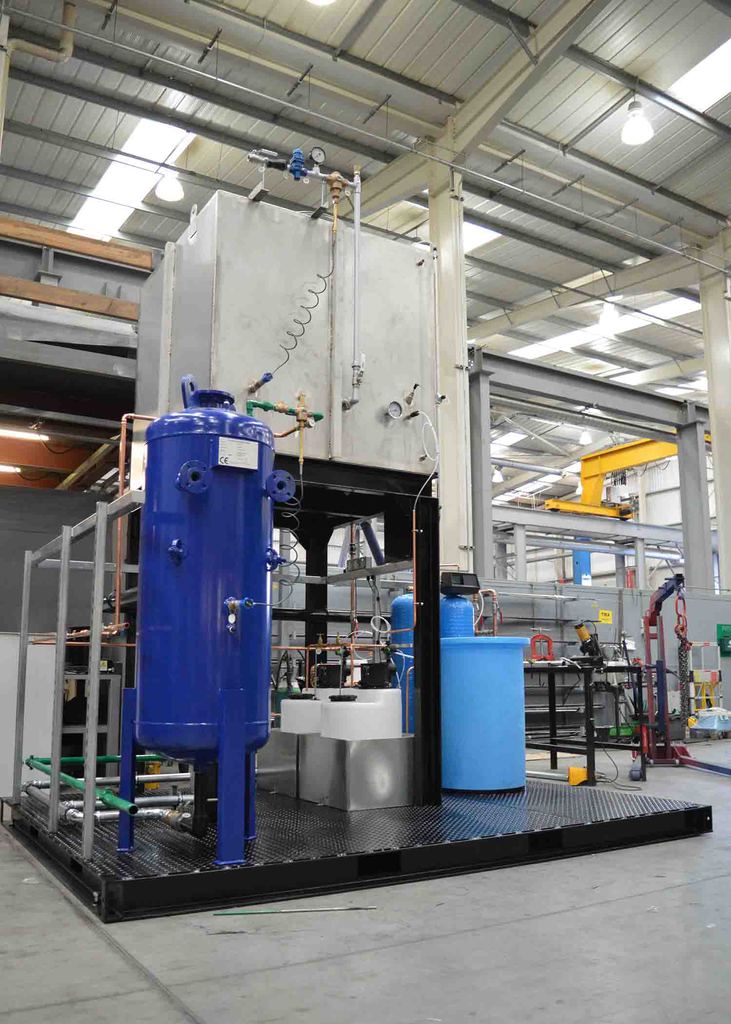 American Pan UK’s cleaning methods and coatings prolong baking pan life and restore optimal performance, with the company perfecting its process for cleaning and recoating baking pans over 40 years and serving some of the world’s largest and most demanding bakeries.

Baking pans are refurbished by supermarket bakeries and industrial bakeries but, over a period of use, they become caked in carbon and flour residue and the release qualities of the non-stick coating starts to diminish. The American Pan UK process starts by soaking the pans for 12/24 hours in heated low volatility organic solvent. From here, the soaked pans go through a series a hot and cold rinses and conditioning tanks, before a new non-stick is applied and the pans returned to the bakeries.

Following a heating mechanism fault within a single unit in American Pan UK’s original plant process line; solvent used for the cleaning process overheated and ignited, with the subsequent fire spreading throughout the facility.

While initially devastating for the company, it provided an opportunity for American Pan and its consultants, RE Architects, to completely re-think its operations, re-design its process lines and subsequently approach Fulton and order its horizontal, gas-fired RBC1500 boiler system.

Commenting for RE Architects, Richard Every says: “Because the unit was devastated by the fire, we couldn’t have easily brought American Pan UK’s processes back into line and, rather than wait and lose business from new and existing customers, we took the decision to reappoint an existing warehousing facility to a new process line. And, because this was a new line with new equipment, we were able to design an optimum layout with facilities and processes that would future-proof the company and enhance the cleaning process.”

While a decision on a new boiler system was considered, on advice from Fulton, a temporary, diesel-powered boiler was hired to provide steam for the new process line, which features a dedicated  solvent  cleaning tank line featuring two, three-cell tanks containing 45,000L of solution each. Additional 5000L tanks are also used for supplementary cleaning and contain detergent and/or conditioning solutions and hot or cold water for the rinsing.

Because they had reconfigured and relocated the entire line, American Pan UK also had to consider how they were going to heat the process and, additionally, consider provisions for downtime, maintenance, etc. However, with the new process line using most of the available space within the new facility, American Pan took the decision to site the plant room for Fulton’s new steam boiler system outside.

The skid-mounted system was delivered to site and craned into position from a neighbouring car park and, once the Fulton solution was sited and installed, the plant room was built around it. Following commissioning of the Fulton system, the temporary hire boiler was removed with its connecting pipework left in-situ should a requirement for additional steam be required in the future.

“Fulton’s heat transfer solution was chosen for a number reasons, with one main factor being the monitoring of the system, which doesn’t require 24/7 supervision.” says Every. “This means the boiler can, at weekends for example, be left un-attended but operational for periods of time. This is vital for American Pan UK’s processes as it can take a long time from a cold start to heat the  solvent and fluids in the various cleaning tanks.”

Steam from Fulton’s RBC1500 boiler system is now being used to heat water to 50° for the pre-wash facility, for heating the solvent to 106° for the deep clean cycle and for heating water for one of the two final cleaning cycles.

Thanks to the efficiency of the Fulton system, with the process heating the solvent to 106° (about 10% hotter than the previous system), American Pan UK has been able to reduce the acidity content of their cleaning solution to make best use of the increase in cleaning performance from the  solvent. The benefit for customers is that the pans enjoy a deeper clean with quicker turnaround times and, when combined with the company’s proprietary coatings, a reduction in the rate at which the tins carbonise in the bakery.