Fluid Heater installations are generally at the simpler end of the spectrum when compared to a complex steam plant, so it came as something of a surprise to Babcock Wanson UK when it was approached by a company asking if it could create a 1MW fluid heater to operate at 275 bar pressure and reach a temperature 490°. Chris Horsley, managing director, explains more 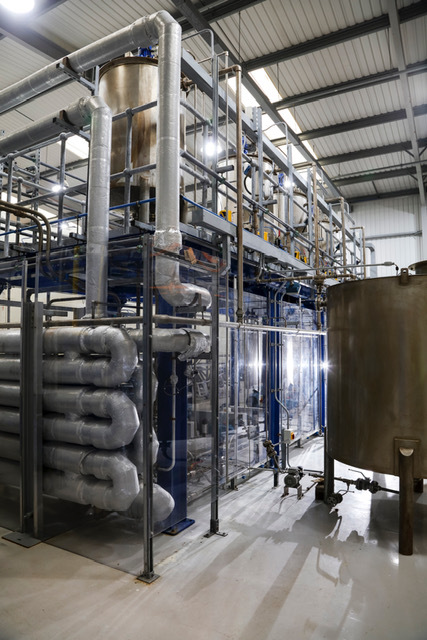 We wondered what kind of manufacturing process could possibly require these extreme figures?  Certainly something out of the ordinary and not a heater we had built before. The mystery was revealed to us – supercritical water.

Supercritical water exists in a state that is neither liquid nor gas, and where the physical properties of the fluid vary in relation to changing pressure, temperature and density. For water to be in the supercritical phase it must have a pressure of >221 bar and a temperature of >374°C. At this state, organic compounds and gases become highly miscible and precipitation of inorganic compounds occurs. Oxidation reactions in super critical water can also be performed. Applications include the treatment of harmful wastes and the synthesis of nanoparticles. These processes are called supercritical water oxidation (SCWO).

The clue as to the need for super critical water was in the company’s name: Promethean Particles.  It was to produce nanoparticles.

It has a large, continuous multi-material nanoparticle manufacturing plant, based in Nottingham, producing in excess of 1000 tons per year (up to 200kg of nano-particles per hour).

Promethean Particles' reactor design allows for continuous production and it offers a high degree of flexibility, enabling it to produce a huge variety of materials. The flexibility is largely down to the wide temperature range achievable with their process, which is important as there is a correlation between the temperature and particle size – large size particles require a higher temperature.

The patented technology also reduces costs and the need for natural resources by using less material in the solution, be it a metal, mineral etc.

Here’s a basic overview of how it works.

There are separate holding tanks for deionised water and highly soluble chemical precursors. The precursors are pumped from the tanks up to containers and diluted to the right concentration for the process. The precursor flows down to a pump where it becomes pressurised to circa 240 bar (depending on process being run) and pumped to the reactor.

Water is fed at ambient temperature to very high-pressure pumps which takes it up to 270 bar and pushes it through a high-pressure heat exchanger to recover heat (making the process a more sustainable one) which takes the water to 360°C.  It is then fed through a Babcock Wanson Heater which adds the last 90°C to take it to the temperature required for the supercritical condition. With standard water, this would typically require just 314kW, but as the super critical water is so dense, up to 1000kW is needed.

The supercritical water is then pumped into the reactor at the same time as the precursor where it mixes and forms the product. The product leaves the reactor through a specially constructed section at 350°C. It then goes through the heat exchanger to cool it down and recover waste heat and the pressure is reduced before passing the product into a holding tank. Depending on the product, further processing may then be required.

The entire process is controlled by sophisticated software and is encased in bullet-proof casing for safety.

The process used by Promethean Particles includes the requirement for a 1MW Fluid Heater to operate at up to 275 bar pressure and reach a temperature of 490°.

Lewis Neve, production engineer at Promethean Particles, comments: “We could only think of one way of achieving what we wanted to achieve which was by using a once-through coil type heater. We dismissed a steam type heater as we didn’t actually need steam, plus the pressure and temperature requirements are so high that it becomes unfeasible – it would require steel several inches thick for example and would also be very expensive.  As a result, we narrowed it down to a handful of manufacturers we considered capable of doing this.”

Following a detailed discussion with Babcock Wanson’s technical team in Milan, the mechanical details were worked out. The heater itself is based on a Babcock Wanson TPC 1000B, but with special inners and controls. In their place we designed and manufactured a continuously wound tube in ASI 321 9mm thick stainless steel, which is incredibly thick when compared to the usual 4mm carbon steel for a standard industrial type water heater. The core of the tube is very small. This material and thickness were chosen to meet the pressure and temperature demands of the process to be able to produce supercritical water at up to 250 bar and 450°C.

As far as we know the design is unique. And that’s not surprising when you consider what a challenge it has been. It had to be designed with the ability to change the flow of water and heat input within quite wide parameters, which is itself complex. We had to develop specialist welding techniques to cope with this material to this design pressure. It had to be sent offsite for post construction heat treatment. Specialist instruments and controls to work at these temperatures and pressures and changing flow had to be sourced. It had to cope with varying temperatures and flows between 600-3000kg/h, depending on process demand.

All in all it took seven months to design and build. All the combustion, control devices and software was designed in house by Babcock Wanson. Relevant mountings, safety valves, pressure controllers and differential controllers were sourced and fitted in house to allow us to gain the all-important PED approval.

A hazard and operability study (HAZOP) was carried out between Babcock Wanson and Promethean engineers to review the controls and integration with the Ui control Scada system, which resulted in some small changes and additional instrumentation.

Lewis Neve confirms: “The heater is running as expected. It took some time to get the final specification sorted as we were inventing something no-one else had, but once we reached the manufacturing stage Babcock Wanson were all guns blazing. They knew what they were doing and it went very smoothly. They have also been very easy to work with, very professional in the way they communicated with us, and the fact that they were in constant communication made it easier for us.”