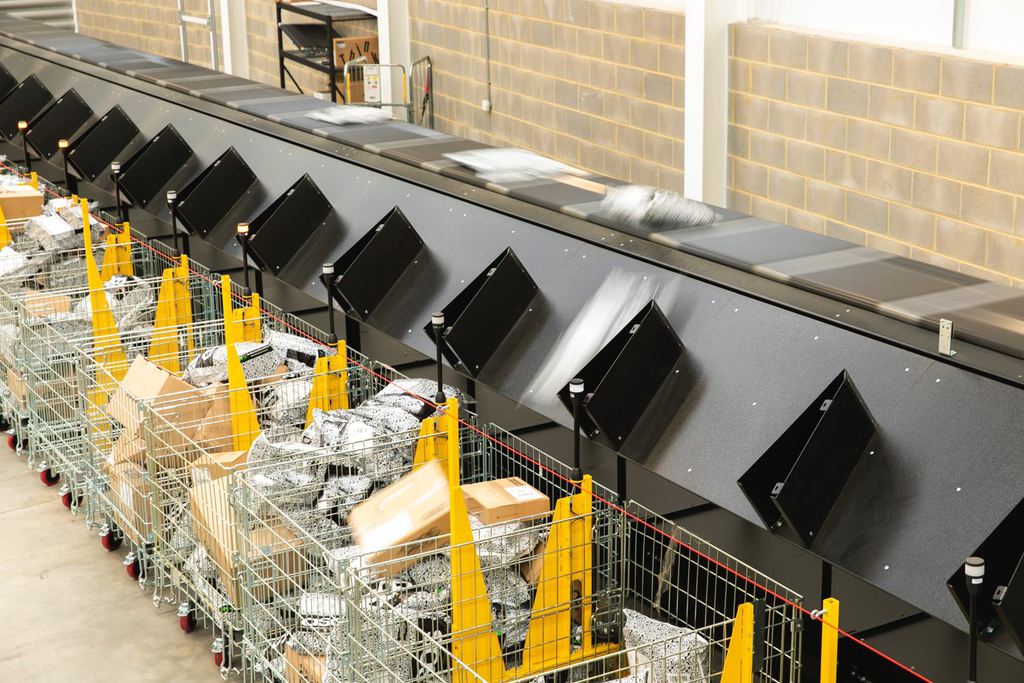 Established in 1972, Skynet Worldwide Express has grown to become the globe’s largest independently owned express courier network with more than 1000 locations in 209 countries and territories. The company, which delivers everything from postcards to grand pianos, has its UK headquarters at Hounslow, adjacent to London’s Heathrow Airport. However, with a strong focus on providing the right solution through personal service, flexibility and attention to detail, the team at Hounslow found that its parcel capacity was under pressure.

The warehouse facility was originally built for storage only, but Skynet decided to install a new sorter system to keep up with increased customer demand. The company turned to LAC Conveyors, an industry leading manufacturer of conveyor and automation systems, which in turn called upon the services and solutions of Interroll.

Primarily, the sorter was installed to deal with outbound parcels for customers in Europe and Asia, and therefore the accuracy of sort was the key differentiator. Effective space utilisation was another demand set out by Skynet.

L.A.C. reviewed three sorter types and recommended the Interroll vertical crossbelt sorter, the main feature of which is its distinctive space saving design thanks to a compact modular approach.

Steve Nuttall, sales manager at LAC Conveyors, says: “A width of just 1.7m is sufficient to install a vertical sorter with 400 x 400mm crossbelt carriers. This configuration can also save valuable space if full containers are transported into the sorter, which is a unique offer in the marketplace.”

Due to the limited amount of space available in the new section of the warehouse, the system had to be condensed as much as possible, but still achieve the 4000 parcels per hour requirement. As a result, the sorter’s chutes have all been configured to discharge on one side only as this offers optimum space utilisation. Prior to the sorter, a belt conveyor with index marks has been installed by LAC to ensure initial parcel gapping. Parcels are then scanned, and the weight and volume of each item is collected.

“The Interroll team kept LAC and Skynet informed and involved at all stages of the enquiry, offering and explaining different options to ensure the right solution was provided,” says Ian Gray, sales applications manager at Interroll. “Installed in November 2018 in time for the peak Christmas season, the new sorter has ultimately increased throughput capacity with room for future business growth.”

“Interroll and LAC have supplied a first-rate system and installation for us” says Lee Smith, London operations manager for Skynet. “The sorter, associated conveyors and scanning equipment have helped improve our workflow immensely and the ease at which the Interroll team coordinated the installation ensured this project was delivered on time.”