Advanced MIG/MAG power sources are capable of controlling arc parameters more precisely and dynamically than ever before thanks to high computing power and finely tuned components designed to perfectly complement one another. Fronius has developed new characteristics and functions that, it says, permit a more stable arc and a simplified welding experience 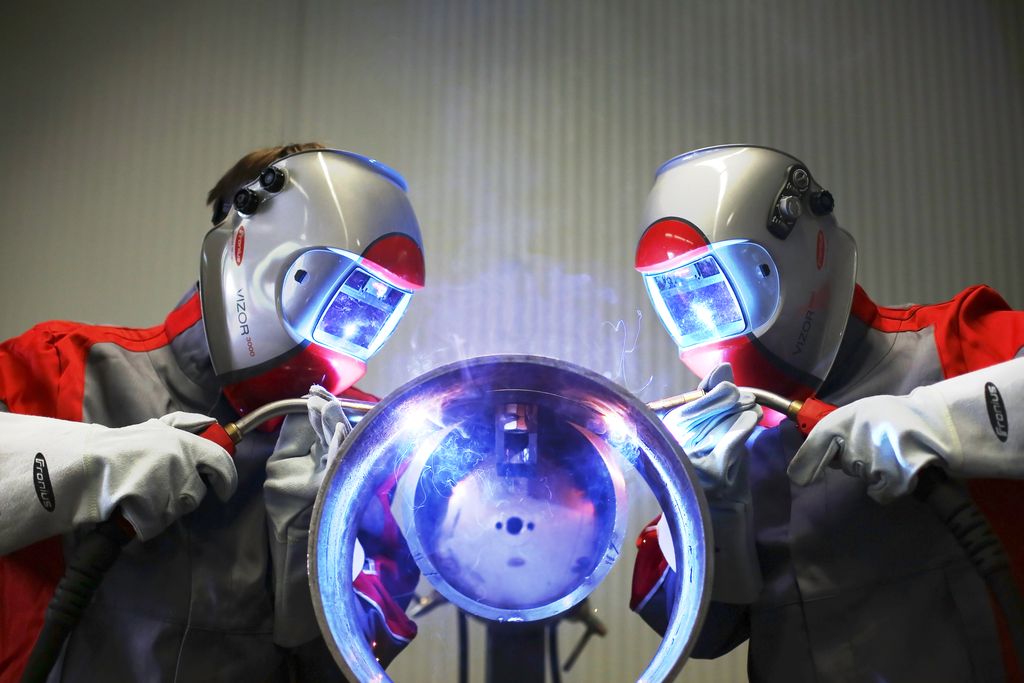 While digital MIG/MAG power sources from leading manufacturers already produce excellent welding results for most applications, Fronius believes they have their limitations. They can falter or, at the very least, require the skills of a particularly adept welder when confronted with external disruptive influences or unfavourable welding positions, or when used for welding thin sheets or short weld seams. Optimising and refining individual components of the welding system cannot solve this problem in the long term, since a chain is only as strong as its weakest link. If, for example, an existing power source is fitted with a more powerful processing unit and the wirefeeder with a more dynamic motor, Fronius says the wirefeeder could still not perform any better, as the other components in the control circuit (system bus, hosepack, welding torch, etc.) hold back the entire system.

For this reason, Fronius has redesigned from scratch all the components of its TPS/i – from the power source to the welding torch – making them fully synchronised with each other. The new MIG/MAG welding platform is capable of processing more data than before, while at the same time exercising quicker and more precise control. The use of complicated auxiliary components, such as a separate cable to measure voltage, is not required.

The company says that while the traditional dip transfer arc is associated with a high level of spatter ejection, with LSC it has been able to achieve a drastic reduction. This was demonstrated during a welding trial (5mm structural steel, vd: 6 m/min; I: 140 A; U: 18.6 V). While the conventional dip transfer arc process produced 2.14g of spatter per weld seam meter, LSC generated just 0.54g/m.

Fronius attributes this largely to the high arc stability that results from the quicker, more precise control circuit of the TPS/i.

As a result of a more stable and focused arc, root arc pressure and deposition rates with the LSC are said to be higher than with the conventional arc variants available up to now. This has also allowed the LSC to boost welding speed. Fronius says this is evident when comparing standard welding processes for root pass welding that has to be performed in a downward or upward direction.

In the case of conventional MMA welding, a root seam can be welded at about 9cm/min – provided that it is performed by an experienced welder. Slag on the inside and outside has to be removed and the weld seam needs to be grinded. The process is slower with TIG welding (about 5.5cm/min), however in this case an excellent weld seam appearance is achieved. With a conventional dip transfer arc the process is quicker. In a downward position, welding can be performed at a rate of up to 25cm/min, though there is a risk of incomplete fusion due to the low arc pressure and the advancing of the weld pool. Until now, the root pass has generally had to be executed in an upward manner. To prevent a drop-through, welding has to be performed using a colder welding parameter and at half the speed (about 12cm/min). The weld seam must also be ground to counteract the risk of a lack of fusion.

The LSC Root characteristic renders such complications obsolete; due to high arc pressure and a high deposition rate, the user can weld in a downward position and therefore at greater speed. If the LSC Root Advanced version is used, the weld seam can be welded at a rate of 25cm/min in a downward position. Fronius says that micrographs prove that, through its specific current profile, LSC Root guarantees an excellent root formation and gap-bridging ability and incomplete fusion becomes a thing of the past.

While LSC Root is designed for root passes, LSC Universal is suited to welding fillet welds, corner welds and lap joints, as well as filler passes, final runs and brazing.

If longer hosepacks have to be used, caution is advised: when used with LSC and other dip transfer arc characteristics, they can have a negative impact on the welding result. Fronius explains that longer cables have higher inductivity; the higher the inductivity in the welding circuit, the longer it takes for the current flow to be reduced. This means that if a short circuit break occurs, the current cannot be reduced in time, leading to the production of spatter.

Consequently, Fronius has designed additional hardware that allows suitably equipped power sources to 'open' the circuit and quickly decrease the current. LSC Root Advanced and LSC Universal Advanced make use of this extra hardware and allow longer hosepacks to be used, as well as offering better weld properties in combination with the standard hosepack.

Although the LSC characteristics generally provide a stable arc and therefore require less manual intervention from the welder to adjust the parameter settings, Fronius offers further functions to make the welder's job easier. In particular, the company highlights the penetration stabiliser. This function keeps the penetration constant during stick out fluctuations with the help of a new wire feed speed control, which is important for fillet welds that are to be welded in the vertical up position with an oscillating motion.

Without the penetration stabiliser (= constant wire feed speed), the current and therefore the penetration would fluctuate between a maximum (stick out at its smallest) and minimum value (stick out at its largest) with the oscillating motion. The stabiliser compensates for this fluctuation by readjusting the wire feed speed to a maximum of 10m/min, thereby ensuring deep, even penetration. This is a benefit for difficult-to-reach weld seams or in robotic welding, where a change in the contact tube distance is often unavoidable, and one which has only been made thanks to the focus of the TPS/i on speed and the arc-force dynamic. To ensure that existing welding procedure specifications can be retained in their current form, the maximum value for the readjusted wire feed speed can be restricted by the user.

Fronius comments that it has by no means exhausted the possibilities of the new MIG/MAG welding platform. Familiar and new characteristics are under consideration or already being developed to make welding easier, more efficient and cost-effective in the future.