Huddersfield-based craft beer specialist, Magic Rock Brewing, has installed a 100hsp 4VT steam boiler from CFB Boilers to generate steam for a number of vital steam-powered processes. The energy-saving boiler, which comes with future-proof steam capacity, is already helping the brewery towards its aim of quadrupling output within two years 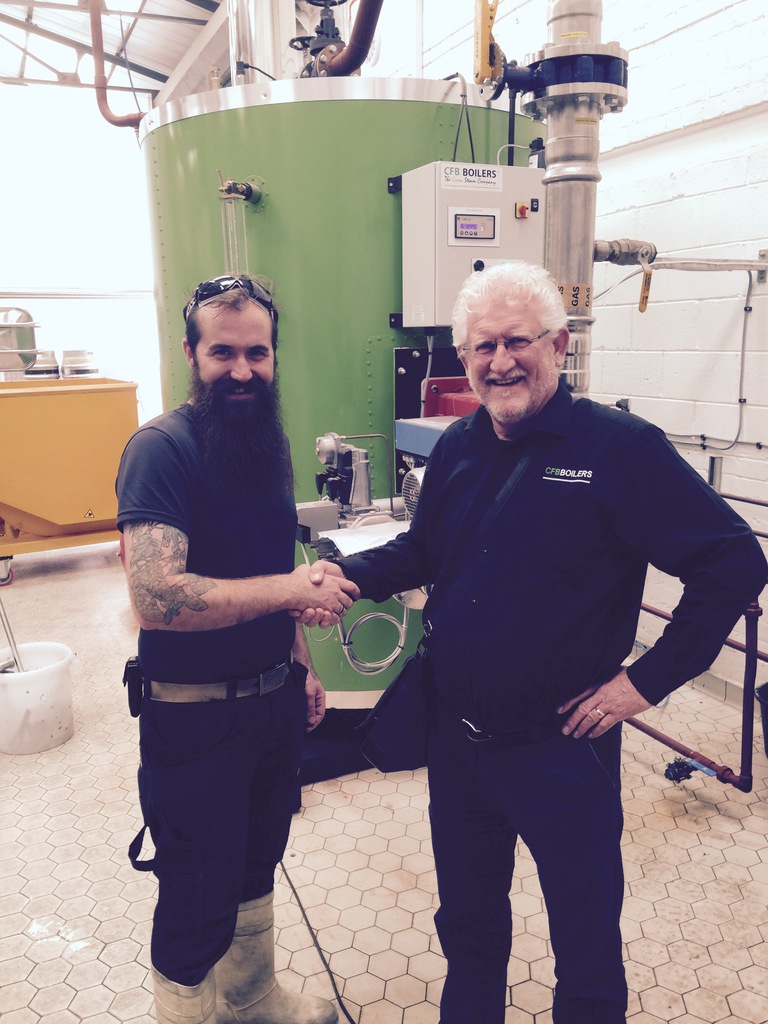 Magic Rock has come a long way in a short space of time. Brothers Richard and Jonny Burhouse, aided by head brewer Stuart Ross, were inspired to start the brewery in 2011 by their love of great beer and the burgeoning US craft beer scene. Initial reaction to the beers exceeded expectations and a fantastic first six months culminated in the company being named ‘2nd best new brewery in the world 2012’ on an independent review site – Rate Beer.

Exceptional demand in the first few years necessitated an expansion in 2015 to a new 25,000ft2 facility close to Huddersfield town centre. The move led to considerable investment in new brew kit, much of which is steam-powered. For instance, steam is used in the brewing process for heating and boiling wort in the kettle. It is also deployed for heating the detergent bath and steaming the casks at the end of the cleaning cycle. Further use for steam includes heating a series of CIP (clean-in-place) tanks, which provide heated detergent and water for cleaning the brewing vessels.

Stuart Ross explains: “The output capacity at our previous site was only 5000 hectolitres a year and quite simply we needed to move in order to meet demand. Steam was our best option at the new site as it’s better and faster at performing the heating function. We are now on course to output 15,000 hectolitres this year, and 20,000 in 2017, which will represent a four-fold increase in about 24 months. The new location has also allowed us to introduce a canning line, which adds to our cask and keg portfolio, and open our own 4000ft2 bar, The Tap, where beer fans can sample the Magic Rock portfolio as close to the source as possible.”

Magic Rock and CFB Boilers were introduced via social media; at the time of its relocation, Magic Rock issued a tweet saying it was expanding to new premises. This was immediately seen by CFB Boilers, who replied asking if the company required steam? Magic Rock tweeted back 'yes'. A subsequent site visit determined that Magic Rock required a 75hsp boiler, however CFB Boilers had a completely refurbished, pre-owned 100hsp 4VT steam boiler ready at its manufacturing facility in Essex, and was able to offer the larger boiler at a similar rate to a newly manufactured smaller model.

“When we heard CFB Boilers’ proposal we realised we could get extra steam capacity from the 100hsp 4VT, which would make us future-proof in the event of further expansion, but at the same price as a new 80hsp 4VT steam boiler. It was a perfect solution for us,” says Ross.

CFB comments that steam boilers are cheaper to run than their electric counterparts. Steam offers efficient temperature control, which is very useful for brewing processes such as heating and boiling wort. Wort is the liquid extracted from the mashing process during the brewing of beer. It contains the sugars that will be fermented by the yeast to produce alcohol.

Boiling wort requires a lot of energy and it is wasteful for this energy to escape into the atmosphere. The 4VT Steam Boiler has a special line that returns condensate to the boiler’s steam chamber at a temperature of around 70 to 90°C. This heat recovery function means that the water requires less energy and time to heat, which is a useful feature for breweries that manufacture multiple beers, where the time it takes for a vessel to complete a cycle needs to be as short as possible.

At Magic Rock, this technical advantage is exploited to produce a host of ales and stouts with colourful names such as Ringmaster, Rapture, High Wire, Dark Arts and Cannonball, not to mention an array of specials that include, Bearded Lady, Magic 8 Ball, Carnival, Big Top, Simpleton and The Great Alphonso.

All of these beers now benefit from the use of the 100hsp 4VT steam boiler from CFB Boilers, which was installed in June 2015.

Stuart Ross adds: “Steam boilers are cheaper to run than electric boilers and this efficiency will help us achieve a quick return on our investment. It is also more cost effective than having separate gas heaters on each jacketed vessel.”

“We also like the fact that the boiler switches itself off when it’s not being used, thus saving further energy,” says Ross. “Additionally, the 4VT is well insulated and can distribute heat more effectively.”

Another feature of the 4VT is its steam chamber, which is approximately 30% larger than most other vertical steam boilers. This not only ensures that the boiler can more efficiently fulfil variable steam load requirements – dealing effectively with peaks and troughs – but virtually eliminates boiler priming by preventing excessive moisture being carried over in the steam. Reducing moisture levels in the steam that is produced extends the boiler life and reduces the need for frequent descaling.

The 4VT steam boiler is manufactured by CFB Boilers at its purpose-built facility in Essex. Prior to installation, the 100hsp pre-owned boiler supplied to Magic Rock had been completely refurbished, with all the original burners and controls replaced, and new cladding installed.

Magic Rock describes the installation process as 'straightforward'. In fact, the same CFB Boilers’ engineer who installed the boiler when it was new, 10 years ago, fitted it in place at Magic Rock.

In addition to cost-savings associated with the 4VT’s energy efficient operation, CFB Boilers also helped Magic Rock save over £13,000 during the installation process by assisting the brewer on the positioning of its gas meter and developing a solution to negate the need for a gas booster. The gas supplier was asked to move the meter closer to the boiler, rather than where originally agreed, thus avoiding the need to cover the piping in stainless steel over ground. With the gas meter closer to the boiler it was possible to bury plastic piping into the ground, saving around £8000 in the process.

A further saving came from not requiring a gas booster. At Magic Rock’s new site (which was not previously served with gas), the new gas supply pressure is low at 21mlbar. Although this is insufficient to run the 4VT steam boiler, which requires 30mlbar, switching to a different gas valve meant it could be run at 18.9mlbar, saving around £5000 on the cost of a gas booster – not to mention the costs associated with servicing such a device.

With its 4VT steam boiler in place, Magic Rock is now ramping up output across its cask, keg and can portfolio. The company sells its beers to almost every conceivable type of outlet, with the exception of supermarkets. Beyond the UK, Magic Rock beers can now be found in countries that include Ireland, Italy, Sweden, France, Spain, the Netherlands, the Czech Republic, Estonia, Poland, Singapore, Hong Kong, Japan, Australia and the USA.