LUBRICATION at the forefront of metalworking machinery maintenance. The role of any lubricant is to create a thin film between two metal surfaces that keeps them apart. This film reduces friction between moving parts, supporting metalworking operations at the same time as minimising wear and reducing downtime, writes David Wright 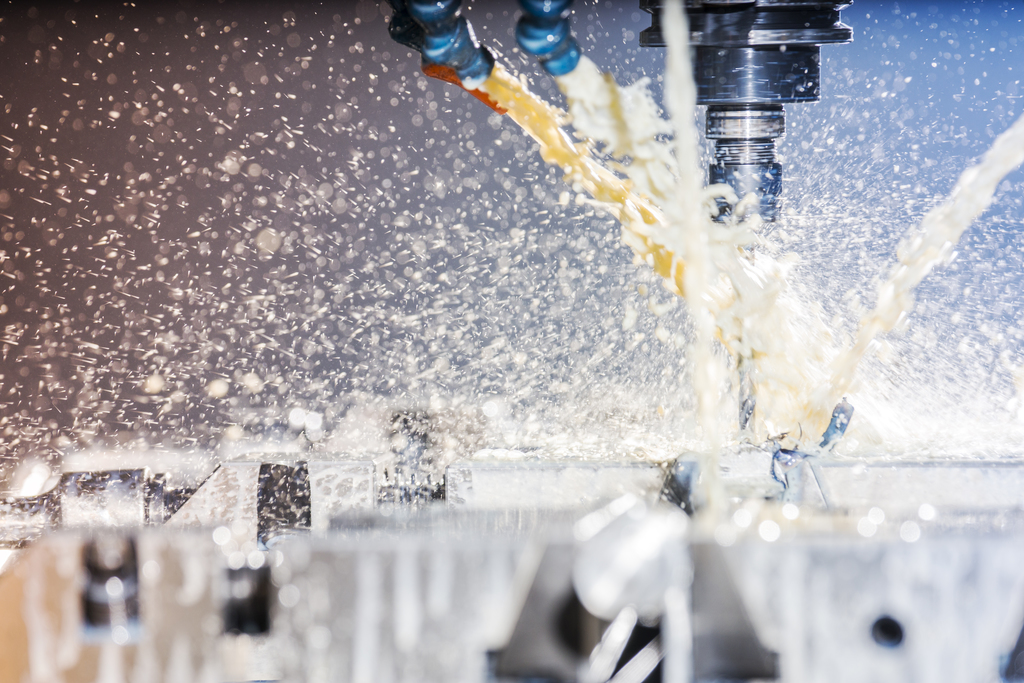 The way lubricants reduce friction forms part of the study of tribology. However lubrication supports machinery operations in more ways than simply reducing friction.
There are five roles which any lubricant performs in operation, reducing friction is just one of these. Cooling is also a key feature of effective lubrication by drawing heat away from the point at which two metal surfaces connect. Helping to maintain effective operating temperatures in metalworking is essential. Without this machinery would overheat, components would suffer and breakdowns would result.

Cooling is often dispensed directly at the point at which metalworking occurs through ancillary hoses or pipes directed at the cutting head.

Lubricants also help with cleaning operations by drawing away metal swarf, or chips, created during operations away from the cutting head leaving surfaces free of filings, shavings or other metal debris.

If swarf was on or around cutting surfaces then not only could they interfere with metalworking causing tiny alterations to operations, but they could also come between the cutting edge and the surfaced to be worked on causing damage to the machined metal or the cutting head itself.

Avoiding a build-up of debris on the cutting head or edge is another key role for lubrication. Left unchecked, swarf can readily accumulate on cutting surfaces interfering with metalworking operations causing inaccurate machining or eventually a dulling of the cutting surface itself.

Removing swarf reduces incidents where metalchips or shavings accumulate on the Built Up Edge, or B.U.E., of a cutting surface.

Helping machinery to last longer is a key aim of any machining shop. Lubrication will support everyday machining operations by performing its core functions, however lubricants also help to inhibit corrosion forming on cutting surfaces.

The addition of corrosion inhibitors to a metalworking fluid reduce the propensity for metal surfaces to oxidise which could lead to rust and the breakdown of metal surfaces.

Water-mix fluids are water-based. These types of fluids have exceptional cooling properties due to their solubility, but they are also effective at lubrication although not as much as Neat Oils.

Neat Oils are directly dispensed at the cutting edge. Due to high temperature machining operations, their viscosity, or resistance to flow, can change over a temperature range so it is important that the fluid can protect across a range of operating temperatures.

Typically the higher the temperature the thinner the Neat Oil could become so these types of oils can have a modifier or improver added to the fluid which alters the viscosity and retains the performance of the fluid.

If the fluid is too thick, however, it might not move easily across cutting edge surfaces, it might resist filtration although it might help to reduce metalworking fluid mist and retain the lubricating film at higher temperatures.

Water-mix fluids by contrast are effective at cooling as water is better at heat transfer than a Neat Oil. However water by itself has minimal lubricating properties so additives are needed to promote lubrication and reduce corrosion due to the incidence of water.

Regardless of the type of fluid used in metalworking operations, effective fluid management is needed in order to maintain the performance of the fluid and to mitigate any potential health risks. These risk arise due to the way machining operations are carried out and the exposure of fluid to environmental factors such as heat and humidity in workshop and machine shops.

There are two major health risks that could arise from poor management of the fluid. The first one is dermatitis if exposed skin comes into direct contact with the fluid and is not removed. In this case the use of Personal Protective Equipment including disposable or nitrile gloves is recommended to prevent direct skin contact.

The second type of health risk is the inhalation of metalworking fluid mist causing irritation to the lungs. Operators can mitigate this risk by ensuring machine guards and enclosures are used and an effective Local Exhaust Ventilation system or LEV, is in place to draw the mist away from the operator.

Regular monitoring of the metalworking fluid quality can help to identify any issues regarding bacterial build-up in the fluid at an early stage. Daily visual checks of a fluid’s odour and appearance, weekly checks for bacteria, ph, temperature and for the existence of tramp oil contamination all help maintain the fluid in optimum condition whilst reducing risks to health.

Weekly, a refractometer can help to measure the working concentration of the fluid based on its refractive index, or the way it refracts light. The use of dip slides, also weekly, can identify the build-up of bacteria, yeast or fungi in a fluid.

Dip slides should always be used in accordance with manufacturer’s instructions. Bacteria growth is indicated when dip slide results are consistently at or above 10,000 CFU/ml (Colony Forming Units per millilitre), these results should be accurately recorded and mitigating action to reduce levels of bacteria taken through the use of a biocide in consultation with your fluid supplier.

When bacteria levels exceed 1,000,000 CFU/ml then immediate action is needed which may require the disposal of the metalworking fluid and a complete system clean. Proactive fluid management is always more effective, safer and usually more cost-effective than waiting until bacteria levels reach critical levels before action is taken.

Managed effectively, metalworking fluids are safe to use and perform well in application. Your fluid supplier can advise you on the best type of lubricant for the job and help you to stay on top of the management of the fluid in a safe, and a healthy manner.