Industrial sites that store hazardous materials are being strongly advised to review their provision for adequate on-site water pollution containment as part of fire accident planning. Phil Collins, national water pollution sales manager with Hydro International, outlines the significant business risks and warns that swift action may be necessary in some cases 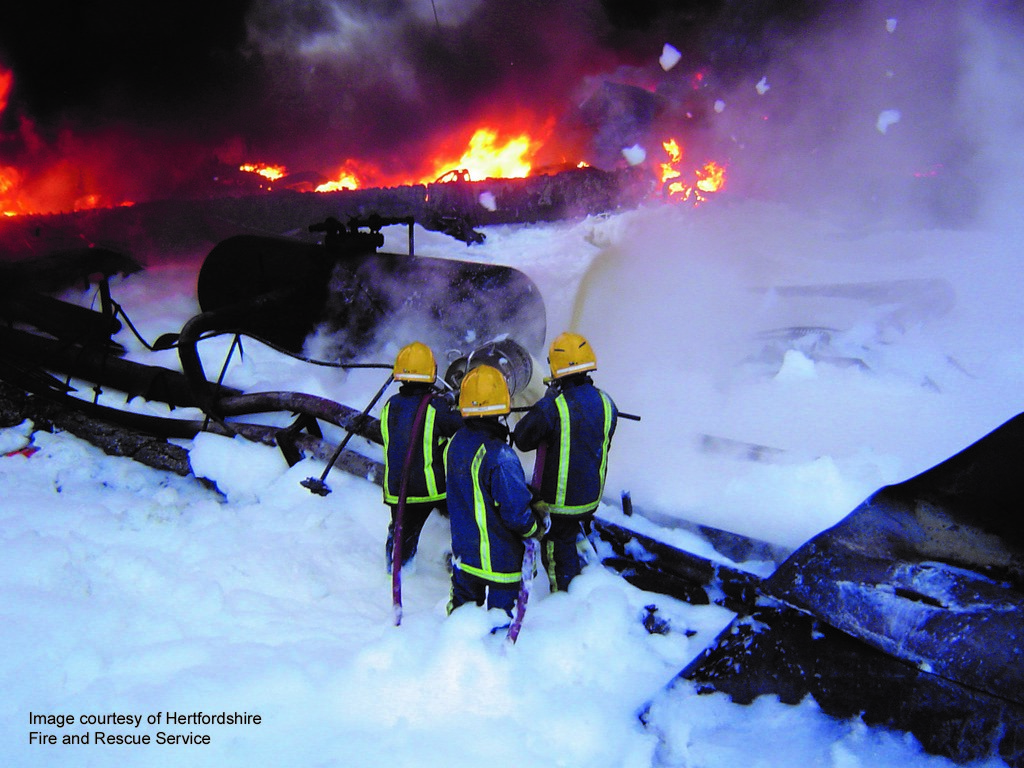 People are often surprised that the most likely environmental damage caused by fire at an industrial storage or warehousing site is not as a result of the fire itself, but the huge quantities of fire water discharged in a very short time to get the fire under control.

It’s not air pollution or even the burning stored materials themselves that most often cause serious environmental harm. In the early stages of a fire, thousands of litres of water are discharged into the environment every minute. The surface water runoff created will pick up the pollutants and contaminants of whatever burning or hazardous substances are present, and if a site is not fully contained, they will escape into the local environment.

According to the West Midlands Fire Service,  a fire at the Jayplas plastics recycling operation in Smethwick in 2013 needed 14 million litres of water simply to contain it – equivalent to six Olympic swimming pools,

After the Buncefield disaster in 2005, the Health and Safety Executive found that protective bunding had many flaws that caused large volumes of fuel, foam and fire fighting water to leave the site. The site’s last line of water pollution defence – so-called tertiary containment – amounted only to the site's surface drainage systems which were not designed to cope with any large-scale releases

It could be highly advisable for operators to review whether their sites are able to safely contain the huge volumes of firewater likely to be needed to control a fire. Not only could some sites be unknowingly in danger of causing serious environmental damage through fire water pollution, there can be crippling fines and costs to pay to put right the environmental damage.

The 'Polluter Pays' principle allows for the recovery of costs needed to put the environment back to how it was before the incident. Often companies may believe that they are fully insured under their standard material damage liability policy, but an incident involving the regulator is unlikely to be fully covered, and most companies are unlikely to be insured against such losses. Fines can also be significant. In the worst cases, a pollution conviction can even include the option of custodial sentences for company directors.

Sites that store or use hazardous or polluting substances, in particular, need to take steps to ensure they do not escape into the environment. Water pollution containment is critical for sites operating under the Control of Major Accidents and Hazards (COMAH) 2015 or Environmental Permitting (England and Wales) Regulations (EPR) 2010. It should also be integral to any compliant Environmental Management System (EMS) – or for those companies working to IS0 14001.

Revised guidance was issued last year by the Environment Agency for sites storing combustible waste instructing them to review their fire accident planning with a ‘must’ action to meet the standards. The guidance includes a requirement to demonstrate the containment facilities and pollution prevention equipment in place for managing fire water.

The UK’s central industry guidance document for pollution containment on all industrial sites is CIRIA C736 – Containment Systems for the Prevention of Pollution.  CIRIA C736 was significantly revised in 2014 in the light of lessons learned, particularly from Buncefield.

To provide water pollution containment, most companies install isolation valves in the outlets to surface water drainage to prevent flood or fire water escaping from the site and contain it until it can be safely removed and tankered away.

Hydro International recommends using drop seal valve technology, such as the Hydro-Brake Isolator pollution containment valve that provides a watertight, failsafe solution and is already installed at more than 150 sites across the UK.

Sometimes bunds or physical barriers will also need to be constructed, especially around hazardous areas, such as oil or chemical tanks to contain spills.

On more complex sites, operators will also still need to be sure that, even with valves installed, in the case of a fire incident, the surface water drainage won’t back up, overtop bunds and storage measures and flow out of the site into the surrounding environment.

CIRIA C736 recommends that companies begin with a full assessment based on the source-pathway-receptor model to aid in a holistic containment strategy.  Hydraulic modelling can be used to map the surface water pathways on and off a site and to then to test out and prove any valves, bunds or temporary storages measures.