Whilst the principles of selective laser hardening are not new, advances in laser technology have made the process more practical for a wider range of applications and an efficient and cost effective method of heat treating ferrous metals. TLM Laser’s director Andy Toms, explains more and looks at the increased efficiency that, he says, results when high powered diode lasers are combined with a mobile laser hardening robot system 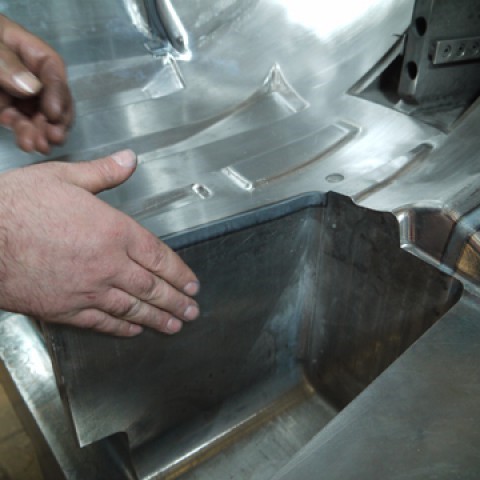 Laser hardening produces an extremely fine-grained and tough structure, which offers high levels of resistance to cracking, making it a suitable solution for many applications. All common metals can be hardened, for example, tempered steels, structural steels, cold work steels and cast steel as well as certain types of grey cast iron. Laser heat treatment and hardening however competes directly with a number of comparatively low cost conventional processes and must therefore offer significant advantages if it is to be chosen as a preferred method.

In practice, using lasers for hardening and heat treatment on ferrous metals, as opposed to the traditional methods of flame or induction hardening, offers a host of tangible benefits. The ability to focus heat on specific areas of a component allows selective hardening, for example on a cutting edge or a gear tooth, or in difficult to reach areas such as grooves or blind holes.

The ability to control the process to this degree ensures that surrounding areas of a component are not affected by residual heat. The power of the laser, combined with the ability to focus the beam at the precise point where it is needed, also means that the time required to heat the part to the required temperature (between 900 and 1300°C) is extremely short, often just a few seconds. Add to this the high levels of energy, flexibility and efficiency available from todays lasers and it is easy to see why laser hardening is fast becoming a process of choice for many applications.

However, justifying the use of lasers for hardening applications has not always been so clear-cut. Early laser hardening systems were powered by CO2 lasers as these were the only laser sources capable of delivering the power required for the process. Those early CO2 lasers were not only large, in the main due to their water cooling systems, but in terms of efficiency they were very poor by todays standards, offering only around 10-15% WPE (the conversion of electrical input energy to useful light output). In addition, the high initial purchase price of these systems, relatively expensive ongoing maintenance costs for gas recharging and mirror replacement, and a somewhat limited effective work envelope, meant that it was often difficult to build a good business case for laser hardening using CO2 lasers.

Fast forward to today and potential for selective laser hardening has risen to new heights with the introduction of the AL-ROCK, a mobile robot targeted specifically for laser hardening applications on metal surfaces.

The extremely high levels of flexibility offered by this system further enhance the process benefits of laser hardening. The ability to take the process to the part means that for larger work-pieces, such as automotive press tools, it is no longer necessary to remove them from the press. Simply drive the laser with its self-propelled crawling chassis directly to the press and the hardening process can begin.

The ability of the robot arm to move freely in 3 dimensions means that even the most complex of shapes and profiles can be processed successfully. Powered by state of the art laser diodes (920-980nm) the system delivers 3,000 W of output power making it possible to case harden to a depth of approximately 2mm, depending upon the material.  The AL-ROCK mobile robot system offers the same high levels of accuracy and repeatability that we have come to expect from traditional robot types, with the smallest programmable increment being 0.01mm and robot repeatability just 0.08mm. The system also has a large and useful working envelope of 2m radius.

Undoubtedly one of the major benefits of this system for users within the automotive sector is the amount of time saved by being able to leave the tool in-situ. This can generate significant cost savings for automotive manufacturers by reducing to a minimum the time which the press is out of action. Stoppages in a volume production car plant can run in to many tens of thousands of pounds per hour, so the ability to be able to work on press tools at short notice, with a minimum of downtime and using a hardening process which is also both fast and efficient makes for a shrewd investment with a potentially short payback time.

Whilst the AL-ROCK system perhaps represents the leading edge of selective laser hardening, the overall performance, efficiency and cost competitiveness of laser diode systems means that we will no doubt see laser hardening continue to take a greater share of this market.